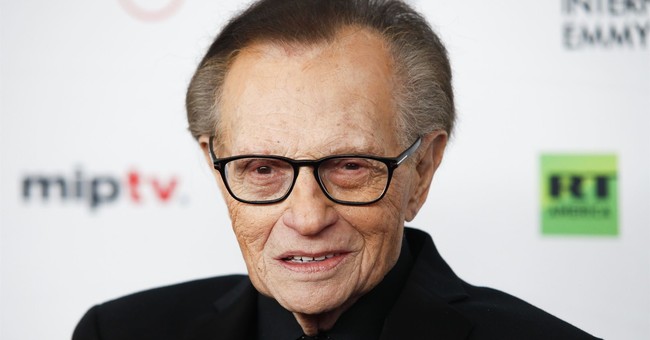 Larry King, the long-time host of CNN's "Larry King Live," died Saturday morning at the age of 87. The cause of death is unknown, although the TV icon was hospitalized with the Wuhan coronavirus earlier this month at Los Angeles' Cedars-Sinai Medical Center.

Ora Media, the latest news organization King was apart of, posted a statement to his official Twitter account, confirming his death.

“With profound sadness, Ora Media announces the death of our co-founder, host and friend Larry King, who passed away this morning aged 87 at Cedars-Sinai Medical Center in Los Angeles,” the statement said. “For 63 years and across the platforms of radio, television and digital media, Larry’s many thousands of interviews, awards and global acclaim stand as a testament to his unique and lasting talent as a broadcaster.”

King had a history of medical issues. Over the years he had multiple heart attacks and underwent quintuple bypass surgery in the late 1980s. In 2017 he was diagnosed with lung cancer and received treatment. In 2019, he had surgery for angina. He was also diabetic.

"We mourn the passing of our colleague Larry King," CNN President Jeff Zucker said in a statement. "The scrappy young man from Brooklyn had a history-making career spanning radio and television. His curiosity about the world propelled his award-winning career in broadcasting, but it was his generosity of spirit that drew the world to him. We are so proud of the 25 years he spent with CNN, where his newsmaker interviews truly put the network on the international stage. From our CNN family to Larry's, we send our thoughts and prayers, and a promise to carry on his curiosity for the world in our work."

Funeral arrangements are in the works but the family is asking for privacy at this time.