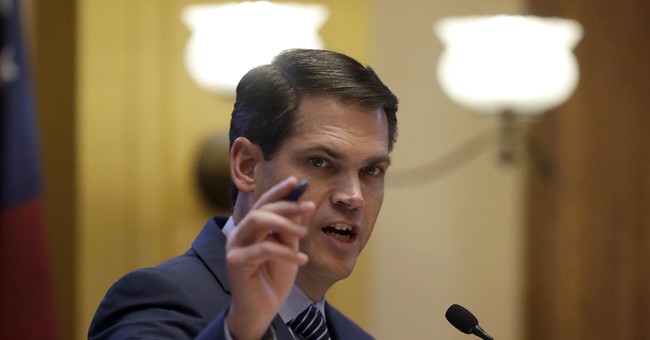 Georgia Lt. Gov. Geoff Duncan (R) on Wednesday slammed Republicans, including President Donald Trump's personal attorney, Rudy Giuliani, for challenging the results of the 2020 presidential election. According to Duncan, those who question the results are partaking in a "misinformation" campaign – and that could have a detrimental impact on the Georgia runoff elections slated for next week.

"The part that I think really hurts us here in Georgia for our January 5th runoff is to have conversations about misinformation," Duncan told Fox News host Sandra Smith. "It's to have folks like Rudy Giuliani walking around the Georgia capital today, just talking about misinformation in every syllable. It's cringeworthy."

According to Duncan, Giuliani and the Trump campaign threaten "majorities" that conservatives hold in the Peach State, a reference to the state legislature.

"We've got a winning attitude here. Folks in Georgia support conservative leadership. We just need to spend time reminding folks all about it," the Lt. Gov. stated. "These folks that are trying to figure out ways to flip the election with misinformation is not democracy. It's not American. I don't support it and I certainly encourage everybody here listening not to support any sort of misinformation campaign."

Georgia Lt. Gov: These folks that are trying to figure out ways to flip the election with misinformation is not democracy, it’s not American, I don’t support it... pic.twitter.com/pw5jZs9lnX

.@BrianKempGA, his puppet Lt. Governor @GeoffDuncanGA, and Secretary of State, are disasters for Georgia. Won’t let professionals get anywhere near Fulton County for signature verifications, or anything else. They are virtually controlled by @staceyabrams & the Democrats. Fools!

We now have far more votes than needed to flip Georgia in the Presidential race. Massive VOTER FRAUD took place. Thank you to the Georgia Legislature for today’s revealing meeting!

Shortly after the election, Duncan warned that challenging the results of the presidential election could ruin the "brand" conservatism has built.

“I’m very, very worried that this affects our brand of conservatism,” Duncan told CNN’s Erin Burnett. “The Republican Party. We got good days in front of us. We need to look for opportunities to improve.”

The Trump campaign is determined to come out victorious. On Wednesday the campaign filed another petition with the Supreme Court – the third in a line. This time they are asking the High Court to toss out votes in Wisconsin because of issues with absentee ballots, something the campaign says violates the state's Constitution.