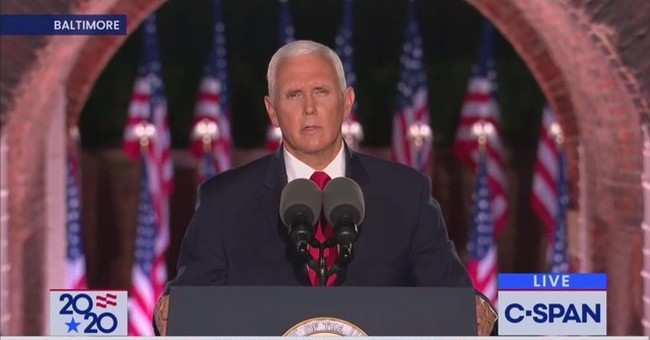 Vice President Mike Pence focused on America's greatness during his Wednesday night speech at the Republican National Convention. According to the vice president, the Biden-Harris ticket is focused on bringing the country down and into darkness while the Trump-Pence ticket is inspired to build America up.

"In these challenging times… our country needs a president who believes in America. Who believes in the boundless capacity of the American people to meet any challenge, defeat any foe, and defend the freedoms we all hold dear...America needs four more years of President Donald Trump in the White House!" he exclaimed

Even though the media is quick to slam the president, Pence said he has seen Trump's character behind closed doors.

"Over the past four years, I’ve worked closely with our president. I’ve seen him when the cameras are off. Americans see President Trump in lots of different ways but there’s no doubt how President Trump sees America. He sees America for what it is... a nation that has done more good in this world than any other, a nation that deserves far more gratitude than grievance," he explained.

Pence hammered the fact that under the Trump administration the economy was booming until the Wuhan coronavirus pandemic struck.

"On November 3rd, you need to ask yourself: Who do you trust to rebuild this economy? A career politician who presided over the slowest economic recovery since the Great Depression or a proven leader who created the greatest economy in the world?" Pence asked.

He also reminded Americans that the Trump administration is one of law and order, not lawlessness.

"Let me be clear: the violence must stop – whether in Minneapolis, Portland, or Kenosha. Too many heroes have died defending our freedoms to see Americans strike each other down," he explained. "We will have law and order on the streets of America."

Pence slammed the Black Live Matter movement who has been quick to say Americans are either pro-law enforcement or pro-black lives. In reality, Americans can be both.

"President Trump and I know the men and women that put on the uniform of law enforcement are the best of us. They put their lives on the line every day," Pence said. "... The American people know we don’t have to choose between supporting law enforcement, and standing with African American neighbors to improve the quality of life in our cities and towns."

At the end of the day, Pence said this election isn't about political parties or agendas. It's about the nation's future.

What will you choose this November?

Vice President Mike Pence: "The choice in this election is whether America remains America...Joe Biden would set America on a path of socialism and decline." pic.twitter.com/nZasn6Rz0F