WATCH: Tim Scott's Emotional Response to the JUSTICE Act Being Referred to as 'Token' Legislation 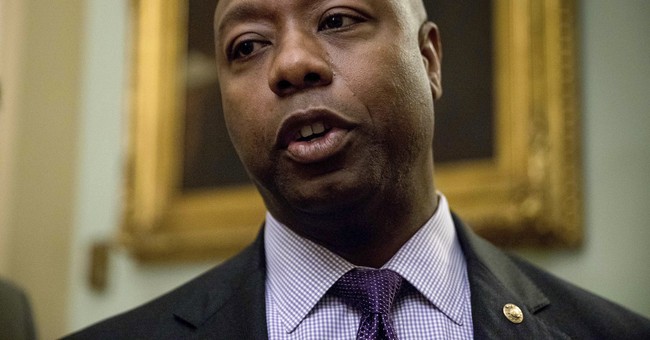 Sen. Tim Scott (R-SC) made a passionate plea to his colleagues on Wednesday, to put politics and race-baiting tactics aside long enough to provide Americans with the police reform they have been looking for. Scott's comments come after Sen. Dick Durbin (D-IL) referred to the JUSTICE Act – the Republican's response led by Scott – as a "token" and "half-hearted" approach to the issue.

According to Scott, he was even more troubled by Durbin's comments because Wednesday marks the five year anniversary of the Charleston shooting at Mother Emanuel Church. Nine people lost their lives, including Democratic Pastor Clementa Pinckney, a personal friend of Scott's.

"To reflect back on the fact that I have in my phone today the text from Clementa where I said, 'Are you okay?' Didn’t answer because he was already dead. To think that on this day as we try to make sure that fewer people lose confidence in this nation to have the senator from Illinois refer to this process, this bill, this opportunity to restore hope and confidence and trust from the American people, from African Americans, from communities of color, to call this a 'token process' 'hurts my soul for my country, for our people," Scott explained. "To think that the concept of anti-lynching as a part of this legislation to be considered a token piece of legislation because perhaps I’m African American and I'm the only one on this side of the aisle. I don’t know what he meant, but I can tell you that this day to have those comments again hurts the soul."

Scott reminded his colleagues that he has been pushing for police reform since 2015, when Walter Scott, an unarmed African American man was killed by a white police officer.

Scott slammed Democrats for referring to black conservatives as "tokens" instead of focusing on addressing the police reform issue.

"But on the other side, they are wanting to race bait on tokenism, while this legislation would provide resources for body cameras, for anti-lynching, for de-escalation training but no, we can’t concern ourselves with the families I have sat with at the White House yesterday and in my office yesterday. Instead, we want to play politics because this is 2020 and we’re far more concerned about winning elections than we are about having a serious conversation on reform in this country," the senator said. "No, we would rather have a conversation about tearing this country apart, making it a binary choice between law enforcement and communities of color instead of working for the American people, bringing the reforms to the table so that we have a chance to balance this nation and direct her towards due north. No, that’s too much to ask on June 17th, five years later."

"I started this conversation on body cameras in 2015, on the Walter Scott Notification Act in 2015, but no, we want to have a political conversation. I reject that. I reject that. And I will tell you that I believe that my friends on the other side of the aisle are serious about police reform," Scott explained. "There is just some that are more interested at scoring political points than they actually are getting a result. Not the majority of them. The majority of them have the same heart that we have for the American people. That’s where we should be focusing our attention on, not the color of my skin. Not tokens."

The South Carolina senator also brought up a valid point: he has no political points to score. He's not currently running for any higher office and he's not up for re-election. For him, this is personal.

"I sit here quietly trying to pass good legislation that was based on the House Bill because I knew if I wanted a chance to get something done, we had to do it in a bipartisan fashion. i’m not trying to run for anything. I'm not up for reelection. I'm not trying to support someone in their victory," Scott said. "I’m trying to say to the families I met with yesterday at the White House – without a camera – and in my office yesterday – without a camera – 'I hear you. We see you. You are not simply sitting there silent. We are working on serious, tangible, measurable results.'"

Sen. Tim Scott: for Sen. Dick Durbin “to call this a token process hurts my soul for my country”https://t.co/49xBsOYGUr pic.twitter.com/aCGTP8r6KB