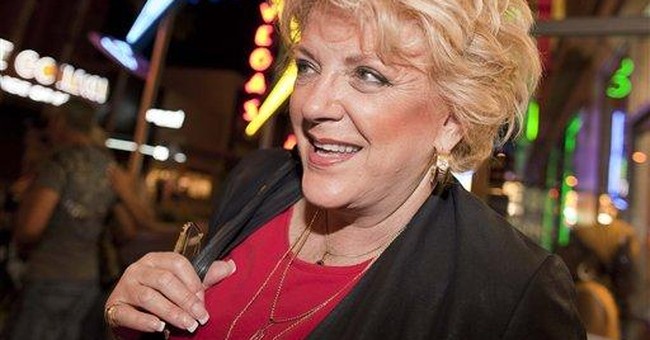 Carolyn Goodman, the mayor of Las Vegas, on Wednesday said she would be willing to offer her city as a "control group" for the Wuhan coronavirus.

"Every one of those lives is a tragic loss but when you count 150 versus 2.3 million, you have to say, 'We have to open up. We have to go back,'" Goodman told CNN's Anderson Cooper. "Our bus drivers, our restaurants –"

"Hasn't it been because of social distancing that the numbers have been what they are?" Cooper asked.

"How do you know until we have a control group? We offered to be a control group," the mayor replied. "Anyone who knows anything about statistics knows that, for instance, you have a vaccine –"

The CNN host interrupted her.

"You're offering the citizens of Las Vegas to be a control group to see if your theory on social distancing works or doesn't work?" Cooper asked skeptically.

Goodman said she offered but was turned down. She rejected Cooper's notion that a control group was a way of seeing if social distancing is effective.

"What I said was I offered to be a control group and I was told by our statistician that we can't do that because people from all parts of southern Nevada come into work in the city. And I said, 'Oh, that's too bad' ..." Goodman said.

The mayor used the idea of the placebo effect to explain her reasoning for offering Sin City up as a control group. In her mind, she said the city could be the "placebo effect" so officials "have something to measure against."

"If casinos reopen are you going to be inside those casinos every single night putting your own life on the line?" Cooper asked.

"Are you going to go to casinos every night and put your life on the line like all the workers?" he asked. "You say you were there holding their hands."

Cooper pressed her again about whether or not she would be in casinos every night.

"What is the purpose of that?" Goodman asked. "First of all, I have a family and I cook a meal every night."

"You're putting your money where your mouth is," the host replied.

Las Vegas Mayor offers city as "control group", "we offer to be a control group" to see how many people die without social distancing. pic.twitter.com/NESE2hActE