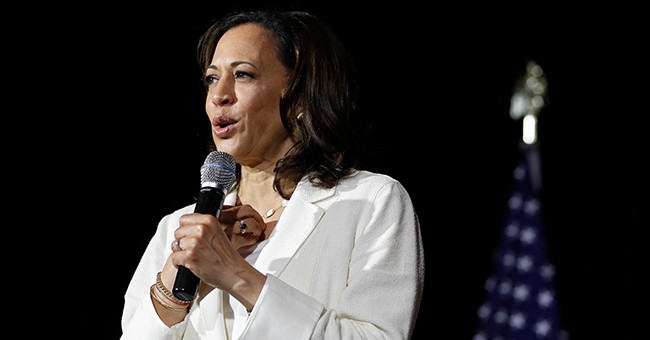 California Sen. Kamala Harris (D) told a group of people in Muscatine, Iowa that she will not take away private health insurance or raise the middle class' taxes.

"I'm not going to raise middle class taxes, and I'm not going to take away your choice," Harris explained. "Because I heard from too many people that said, 'Kamala, yeah, I want to know that everyone's going to be covered. I like what you're doing to extend benefits to include vision and hearing and also hearing aids and dental.'"

"The prime distinction between my plan and a couple of folks on the stage is I'm not trying to get rid of the private insurance companies," she explained. "They need to be brought to bare on ending co-pays and deductibles and they need to compete with our system but I'm not going to take away your choice."

But if you look at Harris' Medicare for All plan, she does want to take away a person's right to choose (emphasis mine):

Second, we will set up an expanded Medicare system, with a 10-year phase-in period. During this transition, we will automatically enroll newborns and the uninsured into this new and improved Medicare system, give all doctors time to get into the system, and provide a commonsense path for employers, employees, the underinsured, and others on federally-designated programs, such as Medicaid or the Affordable Care Act exchanges, to transition. This will expand the number of insured Americans and create a new viable public system that guarantees universal coverage at a lower cost. Expanding the transition window will also lower the overall cost of the program.

If a newborn's parents have health insurance through a private employer, will a Harris administration still consider that child "uninsured?" Why couldn't that child be put on his or her parents' insurance plans?

Expanding the number of insured Americans through Obamacare is what got us into this health care fiasco. Prices skyrocketed. Care went down the drain. It's been a disaster. And if someone is uninsured because they can't afford insurance, where does that money to pay for their care come from? Thin air?