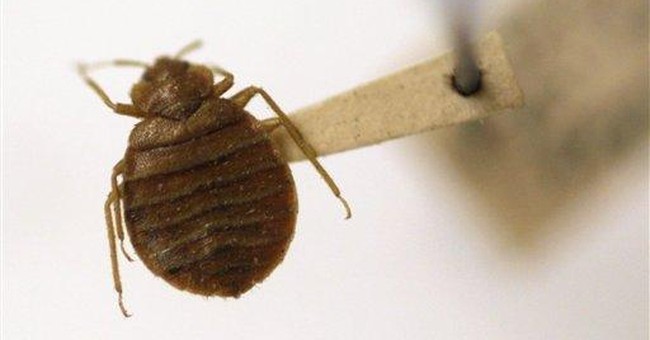 It seems like everywhere you turn these days, people are triggered by something. Okay, more like anything and everything. And now, New York Times Columnist Bret Stephens is triggered because Dr. Dave Karpf, a professor at George Washington University, called him a "metaphorical bed bug," a reference to the newsroom's bed bug infestation.

Apparently Stephens was deeply offended by what was said and went so far as to email Karpf's provost.

This afternoon, I tweeted a brief joke about a well-known NYT op-Ed columnist.

He just emailed me, cc’ing my university provost. He is deeply offended that I called him a metaphorical bedbug.

And, of course, Stephens was so triggered that he decided to "quit" Twitter by deactivating his account.

But it didn't end there. Stephens went on MSNBC to complain about the situation.

"I'm going to be careful with my words because I know they're going to be examined carefully," Stephens said. "I think Twitter brings out the worst in its users and yesterday, a professor at George Washington University described me as a bed bug or a metaphorical bed bug, just in the context of the New York Times having a bed bug problem in our building. And I think that kind of rhetoric is dehumanizing and totally unacceptable no matter where it comes from."

Stephens explained how he "wrote a letter" to Karpf.

"I wrote him a personal email. I didn't go to Twitter. I wrote him a personal email, which I thought was very civil, saying I didn't appreciate it, that I would welcome him to my home in New York, meet with my family and see if he would call me a bed bug to my face because a lot of things people say on social media aren't really the things they're prepared to say in one-on-one interactions," Stephens said.

Although Stephens copied Karpf's provost in the email, he said it wasn't to get Karpf in trouble.

Wow. A friend just sent this to me

Bret says he wasn’t trying to get @davekarpf in any professional trouble when he copied his provost on the email he sent him.

But the best part of this ordeal? The provost didn't take Stephens' side. Instead, he agreed that free speech is important

I hope every student who attends shows up dressed as a bedbug. https://t.co/dSjR7ztWaf

People like Stephens need to do a double take. If you want to be a columnist with an opinion and have that opinion out there for the world to read and hear, then you need to be prepared to be ridiculed and called names. Going to a person's boss because your feelings got hurt is rather childish. And this is why kids today think that if someone hurts their feelings that they're entitled to being compensated in some way. That's not how this world works.

Not only did Stephens blow a nothing burger out of proportion but he made himself look petty and childish. This whole ordeal would have been blown by the wayside if he never brought it up. By mentioning it he made himself a news story.