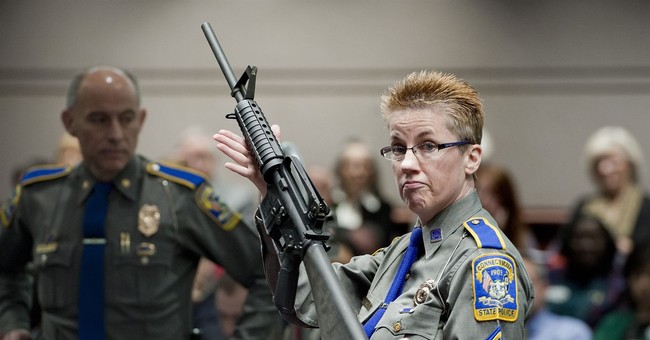 North Carolina-based Remington Arms has asked the Supreme Court to decide, once and for all, if gun manufacturers should be held responsible for crimes committed with their product. Remington has been in a drawn out legal battle with a survivor and families of the Sandy Hook shooting that took place in Sandy Hook, Connecticut in 2012. The gunman used a Bushmaster XM15-E2S, commonly referred to as an AR-15, to carry out his attack that left 26 dead, including 20 children and seven adults. One of the victims was his mother.

The request comes after the Connecticut Supreme Court ruled 4-3 that Remington, Busmaster's parent company, could be sued on state law because of how the rifle was marketed to the public, the Associated Press reported. A lower court judge had originally threw the case out, saying Remington was protected under the Protection of Lawful Commerce in Arms Act, which protects firearms manufacturers and dealers from being held liable when a person commits a crime with one of their products.

"The Protection of Lawful Commerce in Arms Act was passed with bipartisan support in order rightfully assign responsibility and accountability to those who commit crimes," the National Shooting Sports Foundation's Director of Public Affairs, Mark Oliva, told Townhall. "Those seeking to hold manufacturers responsible for the crimes of individuals who purposefully and criminally misuse firearms are wrongfully assigning blame. This would be no different than holding Ford responsible for this who commit heinous crimes with their vehicles.

Remington lawyers made their appeal to the high court.

“Congress enacted the (law) to ensure that firearms — so central to American society that the Founders safeguarded their ownership and use in the Bill of Rights — would be regulated only through the democratic process rather than the vagaries of litigation,” Remington lawyers Scott Keller and Stephanie Cagniart wrote to the U.S. Supreme Court.

The Sandy Hook victims who brought about the lawsuit disagreed.

“Our state’s highest court has already ruled that the families deserve their day in court and we are confident that the U.S. Supreme Court will defer to that well-reasoned opinion,” the plaintiffs' attorney, Joshua Koskoff, said in a statement.

Anti-gunners and gun rights advocates are watching this case, which can have a detrimental impact on gun manufacturers and the Second Amendment. If the Supreme Court rules manufacturers can be legally held liable for crimes committed with their product, this means more shooting victims and their families can and will file lawsuits against firearm makers.

Although the high court leans conservative with Justices Brett Kavanauagh and Neil Gorsuch, it's evident that this case could be a real toss up, especially with Chief Justice John Roberts frequently surprising us with his votes. We know that Justices Ruth Bader Ginsburg, Stephen Breyer, Sonia Sotomayor and Elena Kagan would, more than likely, side with the victims. It's likely that Justices Clarence Thomas, Samuel Alito, Neil Gorsuch and Brett Kavanaugh would find in favor of the manufacturers. Again, that leaves Roberts as the deciding vote.

Here's what's dangerous (and scary): Should the Supreme Court rule that shooting survivors and their families can sue manufacturers, we can almost kiss the Second Amendment goodbye.

Survivors would file lawsuits against every firearm manufacturer whose product was used during a shooting (because, after all, there's no clear indication that the incident would have to be considered a "mass shooting"). Manufacturers would spend the majority of their time – and money – fighting these lawsuits. Eventually, they'd A) run out of money or B) get tired of the ongoing legal battles. Either way, manufacturers would have no choice but to close up shop.

And, little by little, the industry would shrink and shrink until it was no more. And, without a firearms industry, we have no 2A.

Not only that, but how the high court rules in this case could greatly impact other industries too.

Will car manufacturers be held responsible when someone gets into an accident and kills another person?

Will cigarette manufacturers be held responsible when someone develops cancer from smoking their product?

Will fast food companies be held responsible for someone becoming obese from frequenting their restaurant?

Will spray paint companies be held responsible when someone uses their product to tag the side of a fence or building?