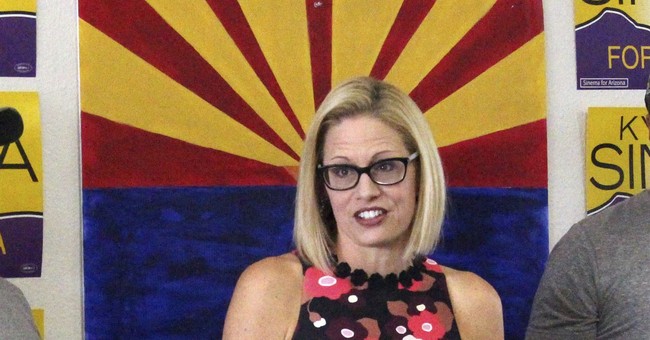 Sen. Krysten Sinema (D-AZ) shot to stardom because of her progressive values and ability to win in a red state. Sinema made a surprising move when she joined a handful of Republican Senators and Joe Manchin (D-WV), who wrote a letter to President Donald Trump encouraging him to implant a pilot program designed to weed out fake asylum seekers. The goal is to deport those who aren’t truly in fear of their lives and have valid asylum claims  without adding to the immigration backlog.

"This pilot program would apply to families who aren't claiming 'credible fear,' which of course is the first threshold in seeking asylum," Sinema told The Arizona Republic. "If someone says 'I left my country because I can't make a living,' (or) 'it's hard to take care of my family' — that's what we call an economic migrant."

If implemented, the pilot program, dubbed “Operation Safe Return,” would speed up the vetting process, giving Border Patrol 15 days to make a determination about a person’s asylum claim.

Agents would interview the asylum seeker to determine if the person truly is afraid of returning to his or her home country. Border Patrol would have three days to make the determination. If the illegal alien doesn’t have justifiable fear then they’d be immediately deported.

“We have worked with your agencies to develop a streamlined process to rapidly, accurately, and fairly determine those family units that do not have a valid legal claim and safely return those individuals to their home countries," the senators' letter said. "The process would use existing authorities, but surge necessary resources to a limited, particular location on the southern border."