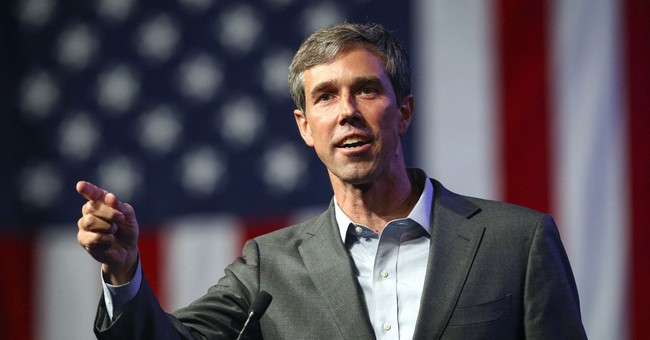 According to the Associated Press, O'Rourke plants to head to Ciudad Juarez, Mexico to meet with so-called asylum seekers who must wait in Mexico while their application is processed. Ciudad Juarez sits right across the Rio Grande River from El Paso, O'Rourke's hometown.

The goal of the trip, according to O'Rourke's campaign, is to meet with “individuals and families directly impacted by Donald Trump’s cruel and inhumane policies" and “shed light on the desperate circumstances those who are seeking asylum and refuge are fleeing, and the conditions these families and individuals are forced to endure when they’ve been turned away from our borders.”

O'Rourke is supposed to meet with illegal aliens, primarily from the Northern Triangle countries of Honduras, Guatemala and El Salvador, CNN reported.

"In all of the debate around immigration, we can't forget who it impacts most: the people traveling thousands of miles, fleeing the worst kind of violence and oppression," O'Rourke said in a statement. "Turning away refugees, families and asylum seekers is not who we are as a country. But as long as Donald Trump is president -- it will be."

Team Beto also plans to hold a "Rally for the Children" outside of the Border Patrol Station in Clint, Texas.

Here's how the event is being billed on his campaign website:

Join Beto to speak out against the cruel, dangerous and inhumane treatment of immigrant children being held at the Clint Border Patrol station as a direct result of Donald Trump’s policies.

The conditions reported at the Clint Border Patrol station housing migrant children are so unsafe and unsanitary that it’s been declared a “public health emergency.” These children deserve respect, dignity, and humane living conditions. Moving them out of these facilities quickly, providing them adequate shelter and support, and uniting them with family members immediately should be this administration’s top priority.

Last year, on Father’s Day, Beto led a march to raise awareness about the mistreatment and detention of children at the Tornillo facility in El Paso who had been separated from their families. He continued to return to the camp until all of the children were successfully released and the facility was shut down.

Folks should be prepared for the heat - please bring water, a hat, and dress for the weather.

O'Rourke has positioned himself as the "expert" on immigration issues because of his experience growing up right along the United States-Mexico border. Instead of enforcing our immigration laws, O'Rourke, however, wants illegal aliens currently in the country to have a "pathway to citizenship." The Democratic hopeful's immigration proposal includes sending $5 billion to improve conditions in the Northern Triangle and deploying thousands of lawyers to the southern border to help process asylum cases.

This is one of the greatest examples of political pandering. O'Rourke is running for President of the United States, not Mexico. Yes, it's important to get an idea of what's taking place on our southern border. Yes, it's important to hear what our Border Patrol agents and those on the front line have to say. But what's ridiculous is a presidential candidate meeting with those who knowingly break our law to see how he could help those people, should he secure the nomination, and ultimately, the White House.