Booker Says He Won't Refuse To Meet With Farrakhan. His Reason Is Pathetic 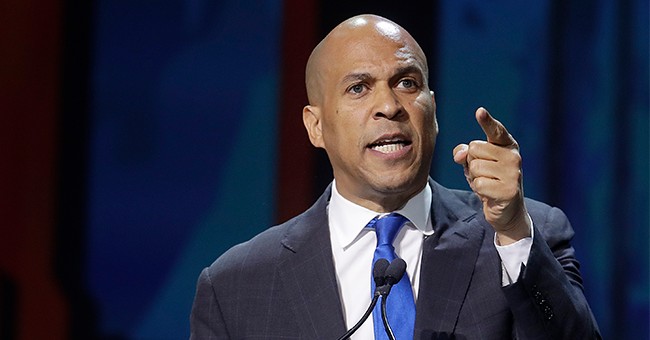 “Vice President Biden’s relationships with proud segregationists are not the model for how we make America a safer and more inclusive place for black people, and for everyone,” Booker said once the news broke.

For some reason Booker takes issue with Eastland and Talmadge but not Lous Farrakhan, a known anti-Semite. On Saturday, Booker refused to distance himself from Farrakhan.

"My question was would you be willing to have avoidance with him [Farrakhan] concerning his anti-Semitism?" a person in the audience asked.

"You-you know, I live in Newark. We have famous Mosque 25. We have Nation of Islam there," Booker explained. "As mayor I met with lots of folks. I hear Minister Farrakhan speeches for a lot of my life, so I don't feel like I need to do that. I’m not one of these people who says I wouldn’t sit down with anybody to hear what they have to say.”

According to Booker, people often sell Farrakhan's literature in his area.

“I am very familiar with Minister Farrakhan and his beliefs,” Booker said.

Louis Farrakhan is one of the most anti-Semitic people out there. He has repeatedly blamed Israelis and Jews for the September 11th attacks. He has said he's not an anti-Semite but anti-termite, clearly referencing the Jewish people.

According to the Southern Poverty Law Center, the Democrats' go-to-guide for hate-filled groups, "Farrakhan is an antisemite who routinely accuses Jews of manipulating the U.S. government and controlling the levers of world power."

The SPLC has an entire page dedicated to past quotes that prove Farrakhan is an anti-Semite.

Just a few of Farrakhan's past statements:

“The Jews, a small handful, control the movement of this great nation, like a radar controls the movement of a great ship in the waters. … The Jews got a stranglehold on the Congress."
–Louis Farrakhan, Saviours’ Day speech, Chicago, Feb. 25, 1990

“Pedophilia and sexual perversion institutionalized in Hollywood and the entertainment industries can be traced to Talmudic principles and Jewish influence. Not Jewish influence, Satanic influence under the name of Jew.”
–Louis Farrakhan, Saviours’ Day speech, Chicago, Feb. 17, 2019

The Democrats have some real soul searching to do. How they decide what's acceptable and what's not is not only mind blowing but it's also rather disgusting.