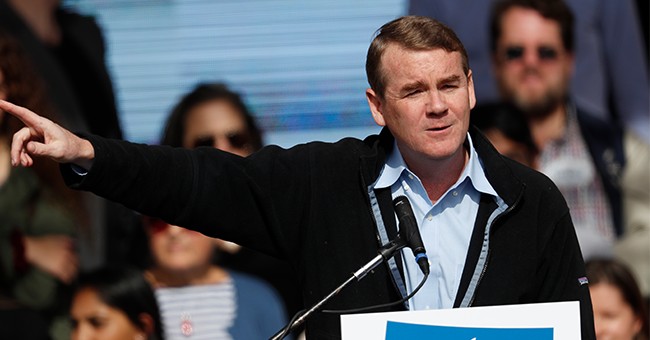 Sen. Michael Bennet (D-CO) announced his candidacy a few weeks ago. He made an appearance on ABC's "This Week With George Stephanopoulos" and one of the issues that came up was last week's tragic shooting in Virginia Beach.

"I think the president can make a difference. The House of Representatives have passed background checks to close the internet loophole. This person bought the guns lawfully as we know. Every single fact pattern will be different. We should pass those background checks. 90 percent of Americans support it," Bennet said.

He argued that states in the west pushed for stricter gun control laws as a means of making states safer.

"After Columbine in Colorado, the people of this western state voted to close the gun show loophole and internet loophole," he said. "It's impossible to argue that our state isn't safer because of this law. If McConnell doesn't take this on the floor, the people of America and the people of Kentucky will hold him accountable for that."

1) The gunman obtained his gun legally. He went through a background check.

2) The gunman had a suppressor. Suppressors are highly regulated. We don't know yet if he obtained that legally. If he did, he would have had to have filled out a special application, paid $200, gone through a background check and then purchased the suppressor. If he didn't go through that process then he purchased it illegally. And another gun law on the books wouldn't have changed that.

3) There's nothing in his background, as far as we know, that says he would have carried out this attack.

4) States that have gun control heavy laws, like California, tend to have more shootings than places where the Second Amendment is protected and cherished.

If people truly thought additional gun regulations would make a difference in stopping mass shootings, we'd see stronger support for gun control groups and fewer instances of people getting concealed carry permits and licenses. We'd see a decrease in background checks through the NICS system, which is used to track the health of the firearms industry.