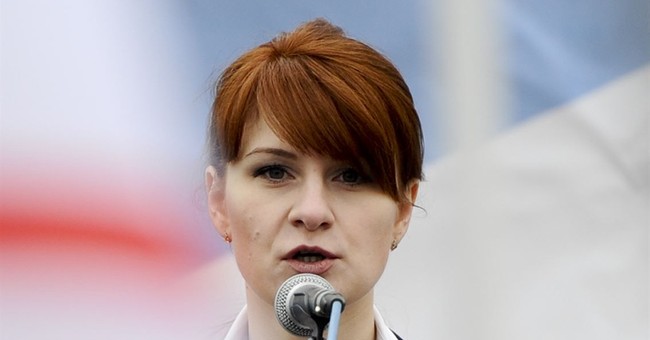 Prosectors want Maria Butina to serve 18 months behind bars for working as a secret agent for Russia. Although Butina wasn't a traditional spy with specialized training, she worked to help Russia at the expense of the United States' national security. Prosecutors have labeled her as a "access agent" because she was “spotting and assessing” to identify potential intelligence assets in America.

Between 2015 and 2017 Butina worked to infiltrate the National Rifle Association (NRA) as well as Gov. Scott Walker (R-WI) and Donald Trump's presidential campaigns at the direction of Alexander Torshin, who served as deputy chief of the Russian central bank.

Butina was introduced to top NRA executives through her then-boyfriend, Paul Erickson, a GOP operative based out of South Dakota, the Daily Caller reported.

"Had she successfully done so, the risks to the United States would have included harm to this country's political processes, internal government dealings, and US foreign policy interests," prosecutors said.

"Activities at issue in this case are part of Russia's broader scheme to acquire information and establish relationships and communication channels that can be exploited to the Russian Federation's benefit," prosecutors wrote in a pre-sentencing memo. “Acquiring information valuable to a foreign power does not necessarily involve collecting classified documents or engaging in cloak-and-dagger activities."

“Something as basic as the identification of people who have the ability to influence policy in a foreign power’s favor is extremely attractive to those powers,” prosecutors said. “This identification could form the basis of other forms of intelligence operations, or targeting, in the future.”

“Butina’s work involved building a rolodex of and information about powerful people who had, or were likely to get, access to and influence over the next presidential administration,” prosecutors said. “Butina’s reports back to the Russian Official on the people she was meeting have all the hallmarks of spotting-and-assessing reports.”

Butina has served nine months in prison since her arrest. She asked the sentencing judge to send her back to Russia. Her defense attorneys argued she was a graduate student wanting to keep in contact with high profile political leaders back in Russia, CNN reported.

"Maria Butina is a devoted daughter, genuine idealist, and compassionate civil activist. Nearly a year ago, she graduated with a master's degree from American University with straight A's and bright career prospects. Now, her world has collapsed because of a decision to help and discuss her amateur diplomacy efforts with a Russian official," her defense attorneys wrote in their sentencing memo.

Butina has worked with prosecutors to bring charges against Erickson, who has been indicted on charges of fraud in South Dakota. Although prosecutors say she should serve a 24 month sentence for her crimes, they did recommend a six month reduction because of her cooperation in Erickson's case.

Butina pleaded guilty to conspiracy charges back in December as part of a plea deal. She was originally arrest in July.

Her sentencing will take place next week.