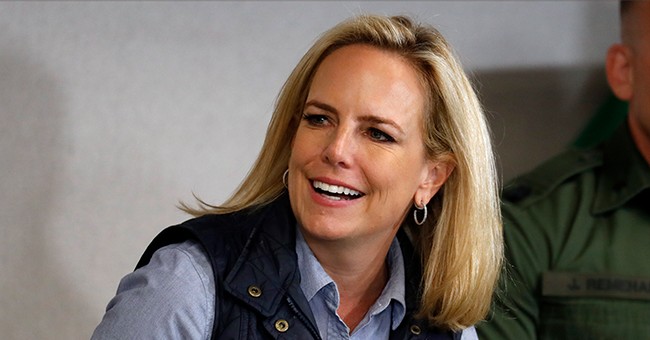 The Boston Globe on Wednesday published a column written by Luke O'Neil, a former waiter, who regretted not "pissing" in Bill Krisol's salmon, Fox News reported. He also said he hopes former Homeland Security Secretary Kirstjen Nielsen remains unemployed because of her role as a “reluctant triggerman for Donald Trump’s inhumane policies of ethnic cleansing”

“One of the biggest regrets of my life is not pissing in Bill Kristol’s salmon,” the first sentence of the now deleted opinion piece read. "Keep Kirstjen Nielsen unemployed and eating Grubhub over her kitchen sink."

“As for the waiters out there, I’m not saying you should tamper with anyone’s food, as that could get you into trouble,” O’Neil wrote. “You might lose your serving job. But you’d be serving America. And you won’t have any regrets years later.”

O'Neil also said the last time he was proud to be an American was when White House Press Secretary Sarah Huckabee Sanders and other Republicans were forced out of restaurants by hecklers.

“It was also one of the only times it seemed like any of the architects of this ruinous xenophobic pre-pogrom might be forced to contend, however briefly, with the consequences of their policy decisions,” the opinion piece read.

The Globe wiped the piece from their website and issued the following retraction:

Note to readers: The Globe Opinion page has removed from its website an April 10 column by Luke O'Neil on former homeland security chief Kirstjen Nielsen because it did not receive sufficient editorial oversight and did not meet Globe standards. The Globe regrets its lack of vigilance on the matter. O'Neil is not on staff.

“Absolute brain genius move by the Globe to edit my story three times then take it down altogether and put up a note saying I’m not on staff instead of perhaps standing by a long time contributor and siding with labor instead of bad faith critics who would hate them no matter what,” O’Neil said on Twitter.

“I will never write for them again," he said.

Conservatives have one question though: why was this allowed to be published?

Who makes the editorial decisions at the Boston Globe? https://t.co/geIu3fhAwt

So the @BostonGlobe is now publishing left-wing losers who advocate violence against Republicans? https://t.co/ghOCjJ9RaM

So the @BostonGlobe is now publishing left-wing losers who advocate violence against Republicans? https://t.co/ghOCjJ9RaM

It’s almost like the Boston Globe is run by people who have no newspaper experience at all. What an embarrassment. And they will never talk about this, ever. No chance.

After receiving backlash O'Neil set his Twitter account to private so only those he approves can see his tweets.

Not sure what's worse: a person writing they advocate for these kind of attacks to take place on others or a news outlet endorsing it and then instantly retracting what was written.