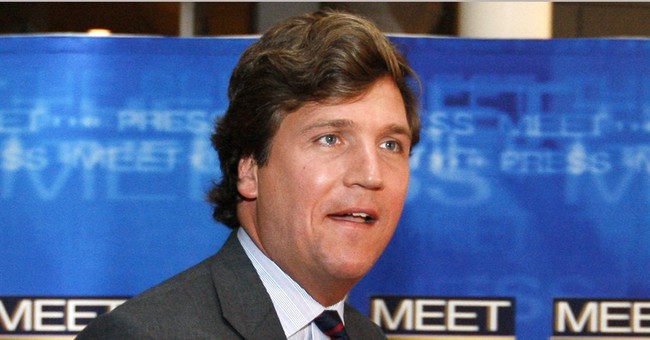 On Sunday, progressive media watchdog group Media Matters released a video montage with clips of Tucker Carlson's radio appearances where he made a number of "naughty" remarks about an array of topics, including rape and the Warren Jeffs' case. The reaction, on both sides of the aisle, seemed to be mixed.

Those on the right saw this as an attack on Carlson because of his status as a host on Fox News and one of the leading voices on the right. In the eyes of conservatives, this isn't about the specifics behind what Carlson said; it's about the Left doing whatever they can to take down conservative voices, people they see as a threat.

Liberals aren’t outraged about inappropriate jokes Tucker Carlson told years ago. They’re thrilled. They couldn’t be happier that they found this stuff. Their excitement is palpable. So let’s stop pretending that this is anything more than a game. Nobody is authentically angry.

Whatever your take on Tucker's comments, remember that Media Matters isn't trying to "stand up for women" or any bollocks like that.

MM is an attack dog trying to neutralize one of the most effective voices on the right, by any means necessary.

Media Matters has been on a mission to get Sean hannity, Tucker Carlson, laura Ingraham and the entire Fox News primetime taken off of television, or to have sponsors abandon them, forever, F**k them.

Someone went through 5 years of radio appearances to get the worst things Tucker Carlson said out of context for one reason. To destroy his career and end his show. It is not about outrage. It is about hunting to find something to take out an enemy. They do it all the time.

Bc it reveals who is on the front lines

And who is afraid to fight back

When the Left attacks

And some even came to the conclusion that combing through years worth of radio interviews would be a daunting task for someone who's a "loser."

You may think your life didn’t turn out the way you wanted it, but at least you’re not working for Media Matters and combing through Tucker Carlson’s radio interviews from half a decade ago. Imagine being that big of a loser.

FYI for those of you who don’t know. Media Matters is a Leftist enforcement arm whose entire purpose is to get pundits on the Right fired. They track down sponsors and have their hordes flood their phone lines. Things like that. Just really gross people.

I always thought there was no worse job than being the guy who writes parking tickets.
But apparently there is an entire field of people who get paid to go through of radio w/ Tucker Carlson to find something controversial they can use to destroy his career https://t.co/WGiZn86aIo

Democrats got Governor Klansman right now today in charge of a state but want to bring up Tucker Carlson said something on the radio 10 years ago? These people make no sense

The Left, on the other hand, went in multiple different directions.

Tucker Carlson used the c-word, said women are “primitive” and are “like dogs” and he also once joked about a 13-year-old being molested, during radio appearances just unearthed. He should be fired by Fox News immediately. pic.twitter.com/UgwhPxwWcb

Some decided to contact Carlson's advertisers to chide them for advertising during the host's week night program.

Tucker Carlson says his comments defending and justifying the sexual assault of children was "naughty" but he doesn't regret it.

Is this the kind of person you want your brand to be associated with?

Okay,@BretBaier how about calling on your network to fire Jeannine Pirro and Tucker Carlson? https://t.co/NNKeZhNm0l

Tucker Carlson is an angry, pompous, vile, human being whose misogynistic and racist opinions are an aphrodisiac for folks who watch his show but wouldn’t dare espouse his views in public. Let’s boycott his sponsors and see how much weight this d-bag really carries. https://t.co/hFjLrLncSz

Brothers and sisters, ?@TuckerCarlson? has achieved the impossible. He’s somehow proven to be even more awful than we thought. https://t.co/ykmI8ksIDk

Is Tucker Carlson the new White House Press Secretary yet?

Others decided to chime in with their own analysis of the situation.

1. This is a weird way to excuse defending someone who facilitated the rape of children.

2. I never want to see Tucker Carlson use the word “naughty” again. https://t.co/w9mBREpM92

Gotta admit -- "If you don't like that I defended Warren Jeffs, watch my show" is a pretty ballsy defense. https://t.co/jv61Pkzskn

Leftists: Let's wring our hands over Tucker Carlson's offhand joke about a 13 year old male rape victim on a shock jock radio station in the mid-2000s.

Also leftists: "Yaaas kween slaaay" to celebrate a 10 year old crossdressing boy who strips at a gay strip club in 2019.

Only time will tell what happens next.