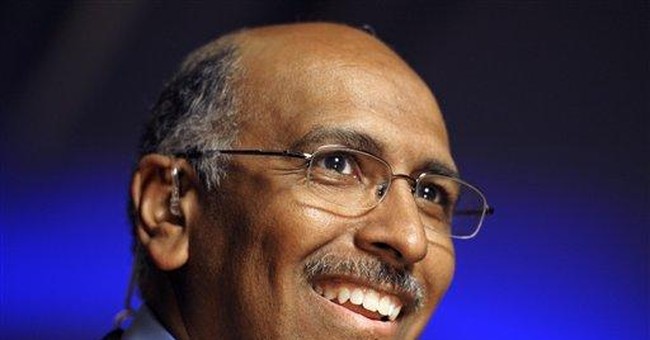 A few days ago, the FBI arrested U.S. Coast Guard Lt. Christopher Paul Hasson, a self-identified white nationalist who wanted "focused violence” to “establish a white homeland." He made a list of targets, primarily Democratic lawmakers and liberal journalists and began researching ways to carry out the attack.

Current MSNBC contributor and former Republican National Committee Chairman Michael Steele made some rather strange comments about the story, saying it was likely that President Trump was upset that Hasson was stopped from carrying out his attack. Steele insinuated that Trump wanted someone like Hasson to carry out these type of attacks.

"Why would we be surprised that a that a self-proclaimed nationalist would not speak out against a self-proclaimed white nationalist? Why are we acting like this is a space Donald Trump is going to go in on behalf of the American ideal?" Steele asked, rhetorically. "No, he's not. And these are his people, alright? And he's not going to stop them and thank law enforcement. He's probably not happy about what law enforcement did."

Steele was pushed on the issue and asked what he thought Trump would do if Hasson did carry out his attack.

"Well, that's the next test in all of this," Steel replied. "That's a very good question and absolutely the next test. Honestly, we would hope there would be the appropriate level of outrage and pushback..."

MSNBC’s Michael Steele says that President Donald Trump was “probably not happy” that the FBI stopped a white supremacist from carrying out a terrorist attack against Democratic politicians and left-wing media figures pic.twitter.com/AJOJlnGp9X

Not everyone was happy with Steele's so-called "analysis" of the situation:

.@MichaelSteele has lost his mind. How could a “news” organization allow such scurrilous slander to go unchallenged on-air?

Also, really tired of leftists like Steele & @NicolleDWallace constantly conflating white supremacy w/ American nationalism, which has ZERO to do with race https://t.co/Z0aBO5muK8

Michael Steele is a hack. One of the worst chairman RNC has ever had and that’s saying something https://t.co/82I0xvbAMh

What is WRONG with these people?!

No, that's an insane, dangerous, false thing to say.pic.twitter.com/GI0B5c0nDS

Here's the thing that's honestly quite irritating about what Steele said:

In every other country in the world, nationalism is seen as a good thing. People are proud to be from [insert country name here]. But here in America, nationalism is equated with white supremacy. If you're someone who's white and proud to be American than you're automatically grouped into the same category as the KKK and the Nazis, even if you condemn their heinous actions.

The Left usually perpetuates this label. Having someone who is supposedly on our side bashing those he should be standing in solidarity with, he's regurgitating the Left's talking points. And because someone from our side repeated those talking points, that makes Lefties think their claims are validated.

The most sickening part of Steele's commentary is the round about thought process. Trump doesn't talk about the situation, so he wanted it to happen. If he mentions it, he's usually it for political gain. No matter what he does, it's a catch 22.

Advocating for violence against anyone is wrong. It doesn't matter what side of the aisle you're on. But trying to say Trump wanted this or called for this is a fat out lie.