Senate Democrats Have Quite the 'Solution' For Fighting the Shutdown 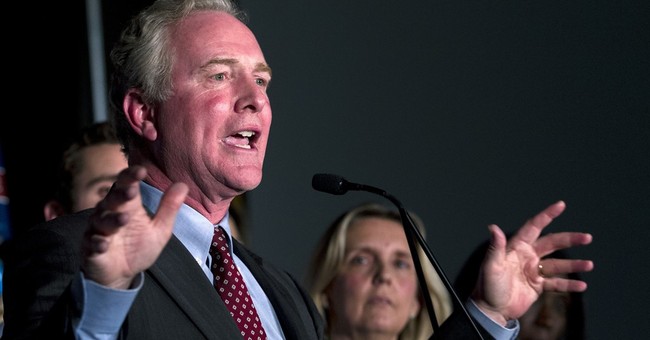 Multiple Democrats are urging their fellow colleagues to block any consideration of bills that are unrelated to reopening the government from the current shutdown.

Senate Democrats should block consideration of any bills unrelated to opening the government until Sen. Mitch McConnell and Senate Republicans allow a vote on the bipartisan bills the House passed to open the government. Mitch, don’t delay. Let’s vote!

Agreed. This isn’t business as usual. This is a crisis, a fundamental failure to govern, and Americans are suffering for it.

The Senate should not take up any bills unrelated to reopening the government until @SenateMajLdr lets us vote on exactly that. #Shutdown https://t.co/IUiJLWP68R

In fact, Democratic Sens. Chris Van Hollen (MD), Benjamin Cardin (MD), Mark Warner (VA) and Tim Kaine (VA) sent a letter to their colleagues urging them to to vote against the motion to proceed as long as Senate Majority Leader Mitch McConnell (R-KY) keeps the senate from considering the House appropriation bill.

We write to urge you to join us in voting against the motion to proceed on Tuesday evening because the Senate should vote on the House-passed Appropriations bill as its first order of business. We must restore services to the American people and address the plight of more than 800,000 federal employees who are being denied pay and facing mounting bills. Our position is strongly backed by the unions that represent federal employees, as well as a growing chorus of grassroots organizations who agree it would be wrong for the Senate to postpone action to reopen the government while one-quarter of the federal government is shutdown and hard-working public servants are not being paid.

The shutdown is now over two weeks old with no end in sight. In addition to the more than 450,000 federal employees working without pay to protect our nation, keep our air and waters secure, and patrol our borders and 380,000 furloughed employees wondering if and when their next paycheck will come, everyday Americans are feeling the pain of the government shutdown. More than 30 million small businesses lack access to federally-assisted loans, farmers preparing for the spring planting season are unable to reach Farm Service Agency support, and thousands of people trying to buy a new home with an FHA-insured mortgage are on hold indefinitely. Progress on CDBG grants is stalled, local businesses that furloughed, putting timely receipt tax returns in jeopardy.

We have also seen tragic consequences from this shutdown. The Trump Administration has decided to leave some national parks open with limited staff, and three people, including a 14-year-old girl, have died in accidents since the shutdowns began.

The New Democratic Majority in the House of Representatives did their job and opening the entire government the first order of business when they passed two measures to achieve that goal. Republican Leader McConnell should immediately bring those bills to a vote in the Senate. The Republican Caucus must not be allowed to contract out their constitutional responsibilities as a separate branch of government to President Trump. They have the power to immediately schedule a vote on the House-passed bills and should make that, or another agreement to end the shutdown, the first order of business.

We also encourage you to continue to highlight the plight of federal employees trying to make ends meet, telling the stories of small business contractors and contract service workers who are being hard hit, and broadcasting the mounting hard of delivery to public services. The federal employee and contractor unions stand ready to assist your offices in developing these events around the issues.

We urge you to join us – and a growing number of grassroots organizations – in taking this position. The Senate should vote on the House-passed Appropriations bills as its first order of business.

Sen. Van Hollen made a similar plea on the Senate floor on Tuesday:

Recommended
Bill Maher Backs Dave Chappelle Amid Criticisms: 'Everyone Needs to Netflix and Chill the F--- Out'
Landon Mion

Senate Republicans want to vote tonight as if a large part of the government isn’t shut down. I’m joining @SenatorCardin, @MarkWarner, and @TimKaine to urge our colleagues to stand up and say no. Our first vote must be to reopen the government. https://t.co/rC128qK0Yh