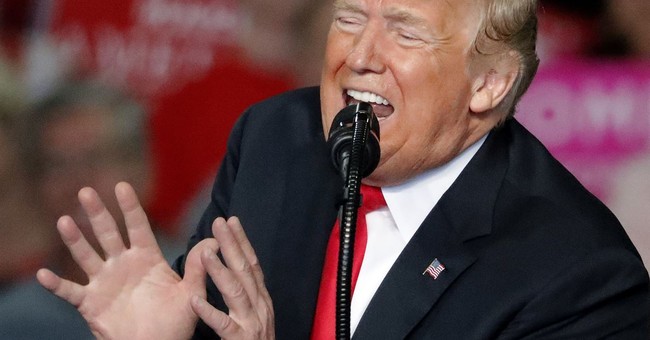 Conservative pundits are upset with President Donald Trump and the White House caving on border wall funding. Trump previously threatened a government shutdown if he wasn't given $5 billion to build the wall, although Congress had allocated $1.6 billion.

In fact, Ann Coulter penned an opinion piece blasting Trump for not getting the funding needed and not making the connections needed to make his campaign promise become a reality:

f you were elected president after decades of politicians doing nothing about the millions of illegals pouring into our country every year, committing crimes, dealing drugs, driving drunk, molesting children and killing Americans like Kate Steinle, and your central campaign promise -- repeated every day -- was to build a wall, wouldn't you have spent the entirety of your transition period working on getting it done?

Wouldn't you have been building prototypes, developing relationships with key congressional allies and talking to military leaders about using the Seabees or the Army Corps of Engineers to build the wall?

Wouldn't you skip the inauguration and take the oath of office in San Diego so you could get started on supervising wall construction immediately after putting your hand on the Bible and being sworn in as the leader of the free world?

You would if you meant it.

Well, Donald Trump didn't do that.

She even went as far as saying if the wall isn't built come 2020 she won't vote for him.

“Why would you [vote for him again]?” she told the Daily Caller. “To make sure, I don’t know, Ivanka [Trump] and Jared [Kushner] can make money? That seems to be the main point of the presidency at this point.”

“They’re about to have a country where no Republican will ever be elected president again,” she added. “Trump will just have been a joke presidency who scammed the American people, amused the populists for a while, but he’ll have no legacy whatsoever."

Is the Border Wall dead? What are the implications for President Trump? @AnnCoulter says it makes him a one-termer -- what say you?

Rush Limbaugh, on the other hand, lamented over the stopgap measure that would keep the government open through 2019, The Hill reported.

If the measure passes "Trump gets nothing and the Democrats get everything, including control of the House in a few short weeks," Limbaugh said. "This is textbook. It’s a textbook example of what the drive-by media calls compromise."

Limbaugh was also quick to point out that the $1.6 billion that was previously allocated for the border wall is now gone.

"That’s gone, too. Not only is there not gonna be $5 billion, there isn’t gonna be $1.6 billion that was already allocated," he said. "So it’s an even better compromise in the minds of the drive-by media and the denizens of the swamp. Not a penny. Forget wall. Think border security."

The Daily Wire's Ben Shapiro shared similar sentiments with the others. On Tuesday, he penned an opinion piece blasting Trump's decision.

It does work. It’s not ineffective. And the only time Democrats seem concerned about excessive government expenditure is when national security is implicated.

In any case, it’s a pretty gutless move for the administration to back down from a fight over the wall after revving up Republicans for precisely that fight – especially since back in January, Senate Minority Leader Chuck Schumer (D-NY) was forced to back down from his own shutdown attempt while trying to push President Trump to grant amnesty to so-called DREAMers. Americans don’t understand the Democrats’ agenda with regard to the wall. They do understand Trump’s. If Trump agrees with that assessment, backing off a fight is a mistake. Meanwhile, the Trump administration is about to send $4.8 billion to Mexico in development aid. So much for Mexico paying for the wall.

It’s an even bigger mistake considering that Republicans are simultaneously pushing hard for a vote on criminal justice reform. This was never a priority for Trump; it’s been far more of a priority for top aide Jared Kushner. Trump ran on the basis of law and order, and yet he’s now pushing for a bill that would ease the requirements in imposing mandatory minimum sentences, loosen the three-strikes rule, and increase “good time credits” that would allow thousands of prisoners to go free the day the bill is imposed as law. There are good arguments in favor of some of the measures in the First Step Act, but suffice it to say it’s a far cry from Trump’s “keep America safe” rhetoric.

Trump voters should be, at the very least, disquieted by Trump’s willingness to back down once again from his pledge on the border wall. Combined with his reprioritization of criminal justice reform, Trump looks not so much tough on crime as ambivalent about it.

During an interview with "Fox and Friends" on Wednesday Michelle Malkin admitted the Trump administration caved on an issue that was important to conservatives.

"We have to hold the Republicans [accountable], particularly [Senate Majority Leader] Mitch McConnell, who has been in office since 1984 and has never been able to get this deal done because he is afraid of a shutdown," Malkin explained. "But now look at what the White House is forced to do: scrounge around for $600 million in the defense budget in order to fund a puny 100 miles? As if border security is an afterthought?"