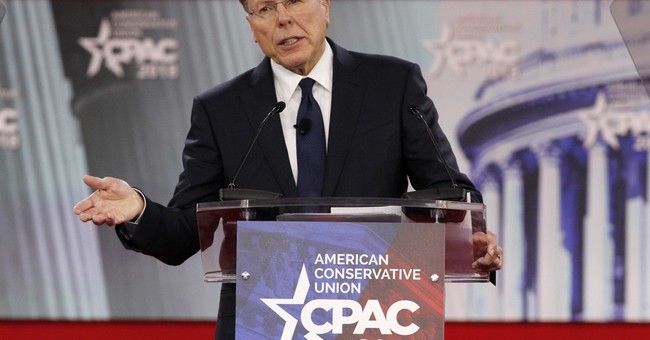 Specifically, Rubin referred to a 1995 letter Bush 41 sent to the NRA rescinding his NRA life membership. This was the letter:

I was outraged when, even in the wake of the Oklahoma City tragedy, Mr. Wayne LaPierre, executive vice president of N.R.A., defended his attack on federal agents as "jack-booted thugs." To attack Secret Service agents or A.T.F. people or any government law enforcement people as "wearing Nazi bucket helmets and black storm trooper uniforms" wanting to "attack law abiding citizens" is a vicious slander on good people.

Al Whicher, who served on my [ United States Secret Service ] detail when I was Vice President and President, was killed in Oklahoma City. He was no Nazi. He was a kind man, a loving parent, a man dedicated to serving his country -- and serve it well he did.

In 1993, I attended the wake for A.T.F. agent Steve Willis, another dedicated officer who did his duty. I can assure you that this honorable man, killed by weird cultists, was no Nazi.

John Magaw, who used to head the U.S.S.S. and now heads A.T.F., is one of the most principled, decent men I have ever known. He would be the last to condone the kind of illegal behavior your ugly letter charges. The same is true for the F.B.I.'s able Director Louis Freeh. I appointed Mr. Freeh to the Federal Bench. His integrity and honor are beyond question.

Both John Magaw and Judge Freeh were in office when I was President. They both now serve in the current administration. They both have badges. Neither of them would ever give the government's "go ahead to harass, intimidate, even murder law abiding citizens." (Your words)

I am a gun owner and an avid hunter. Over the years I have agreed with most of N.R.A.'s objectives, particularly your educational and training efforts, and your fundamental stance in favor of owning guns.

However, your broadside against Federal agents deeply offends my own sense of decency and honor; and it offends my concept of service to country. It indirectly slanders a wide array of government law enforcement officials, who are out there, day and night, laying their lives on the line for all of us.

You have not repudiated Mr. LaPierre's unwarranted attack. Therefore, I resign as a Life Member of N.R.A., said resignation to be effective upon your receipt of this letter. Please remove my name from your membership list.

According to Rubin, the NRA – and specifically LaPierre – have continued to use the tactics President George H.W. Bush had issues with.

"LaPierre has still been at it, as when he declared at the Conservative Political Action Conference (CPAC) that Democrats were nothing less than socialists who want to rob Americans of all their freedoms," Rubin wrote.

You can disagree with how the NRA decides to launch their attacks on Democrats but you can't deny one thing: the very definition of socialism is to take away freedoms. The whole goal behind socialism is to make sure everyone is equal and the government has a say in everything an individual does. When Democrats say they want to place continual restrictions on our Second Amendment rights, that is taking away a freedom.

The craziest part of Rubin's piece though, is her views on Robert Mueller (emphasis mine):

And it’s not just the NRA, of course, that is in the business of smearing honorable public servants. Republicans — from the president to his lawyer to members of Congress to Trump’s parrots at Fox News — routinely insult, smear and simply lie about federal law enforcement (including the FBI and special counsel). The Republicans of 2018 refer to men and women who embody the phrase “law and order” as “stormtroopers,” “Stalinists,” “crooked,” “an embarrassment to our country” and “tainted.” Trump calls Robert S. Mueller III, a decorated Marine, former FBI director and now special counsel, “disgraced and discredited,” and his team of prosecutors “angry Democratic thugs.” The baseless insults hurled by GOP House members at the Justice Department, Deputy Attorney General Rod J. Rosenstein, the FBI, Mueller and the federal prosecutors who work with Mueller should make one’s skin crawl.

This talk, as Bush 41 aptly said in 1995, should offend our own sense of decency and honor and our concept of service to country. Such language “indirectly slanders a wide array of government law enforcement officials, who are out there, day and night, laying their lives on the line for all of us.”

Here's the thing: someone can have a decorated past and still make mistakes. They can still make the wrong judgement calls. Just because Mueller was a Marine doesn't give him a hard pass on every political decision he's made. He failed to properly investigate the Clintons. He's been on a witch hunt over collusion with Russia. Does his Military background keep him from being accountable to the American people? Absolutely not. To make such an argument is not just wrong but it's absurd. No one is questioning his patriotism, love of country or his service. What they're questioning is taking place right here, right now.

It is possible for Americans to question politicians and those in the public eye, even if they've served their country. Sen. John McCain is the perfect example of that. There were a handful of people on both sides of the aisle who disagreed with him politically, but guess what? They still respected his service and the sacrifices he made in the name of freedom. And there's a distinctive difference between writing a blank check for freedom and writing a blank check for political gain.

The truth is this: Absolutely none of this had to do with President Bush's death. Absolutely none of this is pertinent, especially not a letter from 1995. Trying to somehow link these various pieces of history together to come up with a coordinated attack on Republicans, the President and the NRA isn't just wrong but it's a disgrace to someone who calls themselves a "conservative."