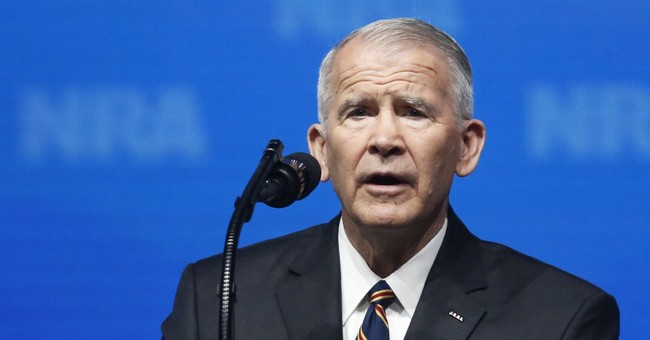 National Rifle Association (NRA) President Oliver North was dropped as a speaker at an Indiana Republican Party event scheduled for Sunday, just days before the critical midterm elections. According to the Indiana GOP, the decision was made because the city the event was taking place in, Noblesville, had a school shooting back in May. A 13-year-old student had shot his teacher and a fellow classmate.

According to the IndyStar, the Indiana GOP was promoting the event as late as Saturday night. When they removed North from the lineup the state party initially said it was due to scheduling conflicts. Then the state chair released a statement.

"Oliver North will not be visiting Noblesville today, as it simply would have been the wrong place and wrong time," Indiana GOP Chairman Kyle Hupfer told the IndyStar in a statement.

Noblesville Mayor, Republican John Ditslear, agreed with the decision and although is a Second Amendment supporter, said he didn't think the town was ready for a "pro-gun speech."

Parents in the area agreed that the decision to have North at the rally was in poor taste.

“Honestly, this was insensitive and hurtful,”Nathan Lambert, whose child was at Noblesville West Middle School during the shooting, told the IndyStar. “I’m a Republican and I’d like to know why my State Party thought this was a good idea.”