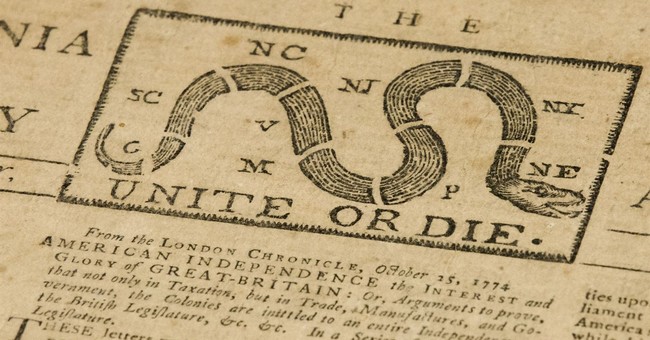 Goodwill workers in southern New Jersey stumbled upon an original, framed, 1774 Philadelphia newspaper with the iconic "Unite or Die" political cartoon in it. The paper was found in a donation box by speciality workers who are tasked with pulling out valuable, high-end items that are then placed on the Goodwill's auction website, NJ Pen reported.

The Dec. 28, 1774 edition of the “Pennsylvania Journal and the Weekly Advertiser” includes John Hancock's signature as well as his plea for the Colonies to fight those who wanted to separate them, the Associated Press reported.

According to Bob Snyder of the New York auction house Cohasco, the newspaper gives insight into what America was like before the Revolutionary War and how political cartoons were used as propaganda tools.

“The viciousness then in some was as much or more as it is today. . (But) the language was more powerful in putting down the other side," Snyder told the AP.

The paper's estimated value sits between $6,000 to $16,000. Its value is expected to rise as the 250th anniversary of the signing of the Declaration of Independence grows near.

The only other known copies of the paper are at Illinois State University, the University of Chicago and Yale.

Heather Randall, the e-Commerce Manager for Goodwill of Southern New Jersey and Greater Philadelphia, is currently shopping the newspaper around to various auction houses in hopes of finding a buyer. They had initially placed the newspaper on the Goodwill website but it failed to receive any bids.

“We were trying to get it back home, or in the hands of a collector or somebody who would be interested it,” Randall told NJ Penn. “Our website doesn’t necessarily collect all these collectors; it’s not the right audience for it."