Bogus 'Study': You're More Likely to Be Shot By a Cop in Pro-Gun States 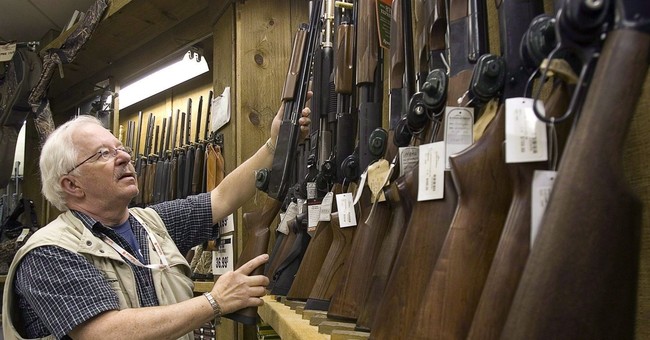 Researchers from the Harvard T.H. Chan School of Public Health and Northeastern University came together to study the correlation between states' gun ownership and officer-involved shootings. The researchers published their findings in the Journal for Urban Health. Their grandiose takeaway: if you live in a state with "looser" gun laws – AKA you're allowed to utilize your Second Amendment rights – then you're more likely to be shot by police officers.

Their abstract has three main points that are rather troubling:

Although numerous studies have examined how rates of police killings of civilians are related to several ecologic determinants of these events, no peer-reviewed study to date has examined the extent to which variation in police involved firearm homicides is explained by firearm prevalence while adjusting for violent crime rates (the most well-established ecologic factor associated with fatal police shootings).

What do researches consider a "violent" crime? Are they using the FBI's definition which includes "murder and non-negligent manslaughter, forcible rape, robbery, and aggravated assault"?

Data come from the Washington Post’s “Fatal Force Database”, which assembles the information from news reports and other sources.

The researchers are using data from the Washington Post, a liberal, anti-gun publication. You know what that means: they're going to cherry pick which "data" they include. And you know the data they store is going to fit their gun control narrative.

Explanatory ecologic variables in our models include the violent crime rate, the percentage of the state population that is non-White, poverty rate, and urbanization, along with a validated proxy for firearm prevalence. We find that rates of police shooting deaths are significantly and positively correlated with levels of household gun ownership, even after accounting for the other explanatory variables.

There is absolutely no reason to look at race and poverty rate when looking at gun ownership. You know why? Because the most important factor they should be looking at is the number of legal gun owners in each state.

That's the miraculous thing about the Constitution. It protects each and everyone one of us, regardless of race, class, gender and location. We. Are. All. Equal. What a concept, right?

"During the three years, they calculated a total of 2,934 fatal police shootings, and found that 56 percent of those killed were armed with a gun. In all, a fatal shooting was 40 percent more likely to happen in states with more guns," ABC News reported.

And what were the circumstances surrounding these shootings? Were the people who were shot committing a crime? Were they felons who illegally obtained a firearm? It's very unlikely that those who were shot and killed were law-abiding gun owners.

The "study's" lead author, David Hemenway, a professor of health policy at Harvard, conducted various interviews about his "findings." Of course, he billed Second Amendment-loving states as a place to be fearful of.

“In this study, people in these states — with higher gun ownership — may also be more likely to be shot and killed by the police due to a perceived fear of the police officer that the person they are dealing with is armed," Hemenway told ABC News.

Of course, he "believes that the 'combination of having weaker gun laws and owning more guns are all factors contributing to the higher rates of police shootings in these states.'"

He even went on CSPAN's "Washington Journal" to discuss "gun violence as a public health issue." The most interesting thing Hemenway said: that the public health community relies on "objective data."

If he wants objective data then why is he relying on the Washington Post's database?

Here's the most alarming part: researchers like Hemenway want to "understand" gun owners.

Gun owners aren't going to answer a survey like this. It's simple. We are private citizens. We want to remain private. The number of guns we own, how we store them and what we use them for is really none of anyone's business. As long as we're obtaining the firearm legally and not committing a crime, no one needs to know what we do with our guns. Period. End of story.

A Word to the Wise

I would challenge professors who want to "study" this supposed gun violence to come to states like mine (Idaho) and see what the people are really like. Yes, we love our guns. Yes, we love our freedom. We support our law enforcement, not work against them. But more than anything, we love America. And we will fight like hell to protect her.