Schumer Admits Democrats Have a Strategy to Keep Kavanaugh From Being Confirmed. Here's Their Plan. 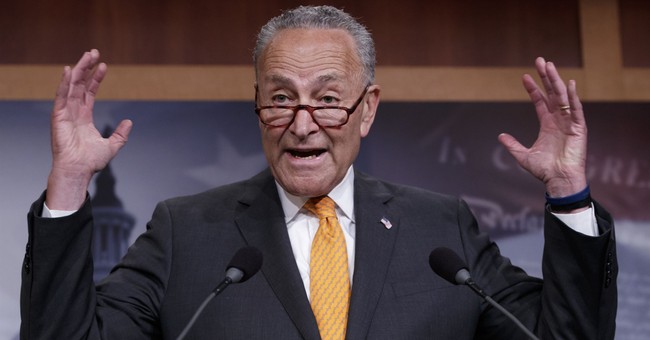 While the FBI completes a seventh background check on Judge Brett Kavanaugh and investigates multiple allegations of sexual assault, the Democrats have launched a new tactic to keep the judge from being confirmed: punch holes in his statements and make people question his credibility.

According to Chuck Schumer (D-NY), Kavanaugh was "mislead[ing] senators about everything from the momentous to the mundane," to make sure he was confirmed to the Supreme Court.

“The harsh fact of the matter is that we have mounting evidence that Judge Kavanaugh is just not credible,” Schumer told the Associated Press on Monday.

Senate Majority Leader Mitch McConnell (R-KY) has seen right through the Democrats' attempts and said the full Senate will be voting on Kavanaugh's nomination sometime this week.

"The time for endless delay and obstruction has come to a close," McConnell said.

President Trump also saw what the Democrats were attempting to do and called them out on Twitter.

Wow! Just starting to hear the Democrats, who are only thinking Obstruct and Delay, are starting to put out the word that the “time” and “scope” of FBI looking into Judge Kavanaugh and witnesses is not enough. Hello! For them, it will never be enough - stay tuned and watch!

It appears that Kavanaugh's confirmation will come down to Sens. Jeff Flake (R-AZ), Susan Collins (R-ME), Lisa Murkowski (R-AK), Joe Manchin (D-WV) and Heidi Heitkamp (D-ND), who seem to be holding out for the results of the FBI investigation.

The full Senate vote is expected to take place on Thursday.