Colombian President: Military Intervention in Venezuela Would Be 'Unacceptable' 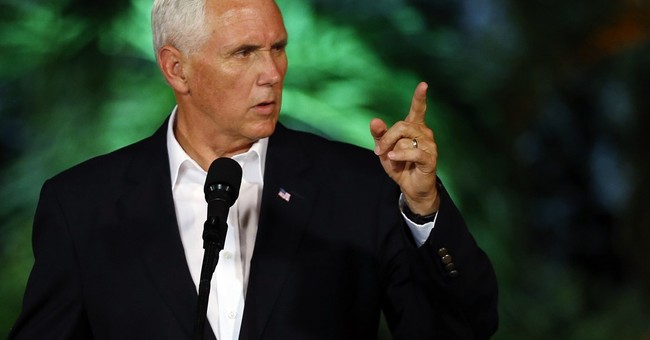 Vice President Pence condemned the tyranny of Venezuela’s government, in President Trump’s words, saying that America “will not stand by as Venezuela crumbles.”

Pence is visiting Colombia, the first stop on his tour of Latin America to gain support in helping restore democracy in Venezuela.

In the joint press conference with president of Colombia, Juan Manuel Santos, both leaders emphasized a hope for peaceful solutions. The vice president said that Donald Trump “remains confident that, working with all of our allies across Latin America, we can achieve a peaceable solution to the crisis facing the Venezuelan people,” but called on Colombia and neighboring nations to do more.

Mentioning the sanctions recently issued by the U.S. against Nicolas Madura-- president of Venezuela--and his supporters, Pence said to Santos, “we will continue to take action until the Maduro regime restores democracy, holds free and fair elections, releases all political prisoners, and ends the repression of the Venezuelan people.”

Santos agreed that the U.S. and Colombia have always upheld the “freedom, democracy, respect for human rights, and, naturally, peace.” And that they would work till Venezuela becomes a democracy again.

But he said, “A military intervention would be unacceptable to all countries in Latin America.”

While Pence hopes that efforts will be peaceful, he said,

“We do believe that addressing the core issues of judicial reform, infrastructure, basic services, will all be part and parcel of moving the nation forward in the years ahead.”

Madura spoke on the nature of his meetings with the vice president:  “What we did was to strengthen the rule of law, as well as our democratic institutions, and to give our countryside, our rural area, and our agrarian agricultural policy the importance that they should have had for a very long time.”

"Putting an end to conflict is one thing, but building peace -- that is another thing and a very different thing," he said, adding that he was grateful for the aid from the United States.

He said, “America is a continent of peace. It is a land of peace. Let us preserve it as such.”