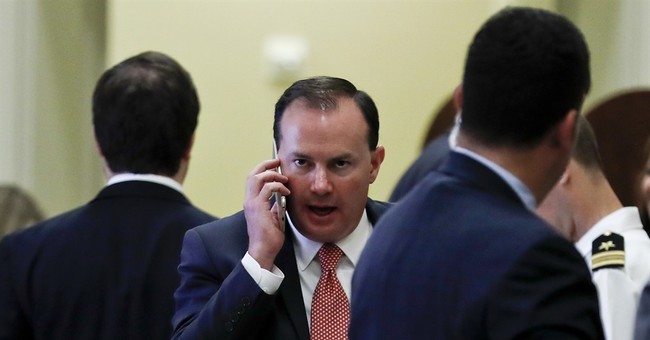 Senator Mike Lee (R-Utah) addressed the students at the National Conservative Student Convention Tuesday, calling them to fight for the principles of the Constitution. How to restore the Constitution to a place of prominence in our discourse? Storytelling.

Lee spoke of the unsung minorities who contributed to the shaping of the Republic, who he recognizes in his book “Written Out of History.” Their history—the stories of women, and Native Americans, and minorities, are little known. But these people helped the direction of the Founding. An Iroquois chief, Canasatego taught Benjamin Franklin the “principle of federalism.” The Iroquois confederacy gave up some of their sovereignty for limited purposes, but protected the liberty of each tribe. Franklin told the other founders, and the concept shaped our nation's founding documents.

“We have strayed badly from the truth,” he said “but we can bring it back.”

To return, Americans must uphold their rights--since they will not uphold themselves. He recalled that while America enforced the limits and protected freedom spelled out in the Constitution for about a century and-a-half, but for the past 80 years, this has changed, we deviated, allowing government too much power.

As the power was moved to D.C., the protection of the separation of powers has also deteriorated, he said. As Congress has gained more power, it has become too busy to make laws. “Instead, we delegate the lawmaking power. This is wrong.”

Because the lawmaking is delegated to people without the constitutional authority to enact laws, and they cannot be fired by the people, “We have a people living under a government not of their own creation,” he said.

“This is very dangerous." And the cost-$2 trillion- is disproportionally on the shoulders of the poor middle class.

Six of the wealthiest counties in the U.S. are suburbs of Washington D.C as another example of the accumulation of power.

“We as a people, as Americans, believe in the constitution very deeply. We just happen to be governed by people at least at the federal level who are non-believers. We can make them believers again if we re-inject the constitution back into our national political discourse.”

Lee finished his call to action, saying, “I invite you to join me in this cause…as we do, we will prosper.”