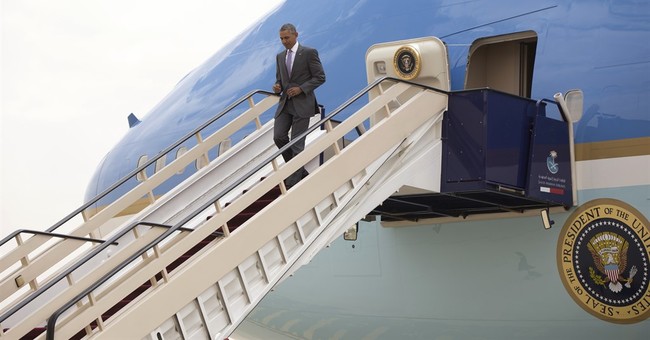 WINDSOR, United Kingdom - President Obama will fly to the UK on Thursday, reportedly to see HM The Queen during her 90th birthday week. The president is making the 4,000 mile journey across the Atlantic despite being unable to get to Justice Scalia’s funeral in February.

Antonin Scalia died unexpectedly at his home in Texas but his funeral was held in Washington, D.C., a short drive from the White House. Instead of the President and first lady attending the funeral the Obamas sent Joe Biden and his wife, Jill.

At the time Townhall suggested this was the first time "in at least 65 years" that a current president had skipped the funeral of a sitting justice. The move was widely seen as a snub to the fiercely conservative Supreme Court justice and his remaining family.

In contrast the president will visit the Queen’s home of Windsor Castle on Friday. The White House has described the visit as a “private lunch,” timed to coincide with Elizabeth II’s 90th birthday. Unusually for an American president the Royal Borough of Windsor has said it will not hold any events to mark the occasion.

The borough usually turns out in force to greet foreign leaders including President Sarkozy in 2015. It did so despite France being seen as far less important to most British people than America is.

After Friday's lunch Obama will head back to London to have dinner with Prince William, Princess Kate and Prince Harry at Kensington Palace. One insider told Townhall the two visits "were little more than a last opportunity to sight see before the Obamas leave office."

The president is reported to have a good relationship with the Royal Family, who were ordered by the British government to launch a charm offensive when Obama returned the bust of Churchill from the Oval Office. The bust had been an important feature of the room when President Bush was in office.

During his stay Obama will also hold a town hall meeting in London and a press conference at the Foreign Office. He is expected to come out in favor of the UK remaining in the European Union when the country holds its referendum on June 23.

The United Kingdom Independence Party leader, Nigel Farage MEP, has led criticisms of Obama’s visit, describing him as the “most anti-British president ever.” However, a YouGov poll showed that 66 percent of the British public do agree with the leader of a “friendly nation” offering advice on the major issues such as EU membership.

The Mayor of London described Obama as a “hypocrite” for advocating the UK’s continued membership of the EU, when no U.S. leader would ever cede similar powers to a foreign government. Despite the complaints of British conservatives there are factions within both the Democratic and Republican Parties that believe having a fiercely pro-American country in the EU would curb its excesses.

The former Conservative Leader Iain Duncan Smith has described the intervention over Europe as an act of bullying by Obama, begged for “on bended knee” by David Cameron.