Five Terrorists Arrested In UK, One At London Airport 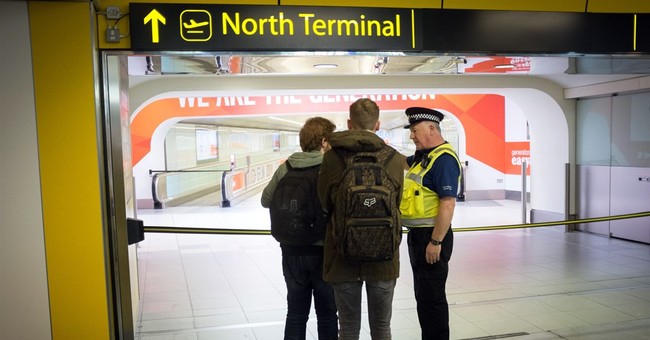 LONDON, United Kingdom - Five suspected terrorists have been arrested in an operation to hunt down those responsible for the terror attacks in Brussels and Paris. Four were arrested in the City of Birmingham last night, another was arrested at Gatwick Airport in the early hours of this morning.
West Midland Police say they arrested three men, aged 26, 40 and 59, and a 29-year-old woman. It is not clear whether the man arrested at Gatwick Airport was planning a repeat of the Brussels Airport attack. However, the timing of his arrest might be significant, given it was just hours after the raid.
It is now known that the bombers in Brussels had visited Birmingham, which is the UK's second largest city. It is home to a large Muslim population, and it is not unusual for families from countries like Pakistan to have moved to several countries in Europe.
Belgian national Mohamed Abrini, who is suspected of involvement in the ISIS attacks in Brussels, had traveled to Birmingham last year and took photos of a soccer stadium. He is also believed to have been connected to the Paris attack, once again raising fears of multiple active terror cells in Europe.
The head of the European Police Service Europol has already said recent immigrant from countries like Syria has led to around 5,000 jihadis entering Europe. They pretend to be refugees and have become undetectable amid the chaos in Southern Europe.
Under the terms of the Schengen Agreement most EU countries do not police their borders. This means that a terrorist who lands in Italy, can make it as far as the English ferry port in the French city of Calais before they get stopped.
Thousands of migrants are camped there permanently, and authorities have little idea who they are or whether they are genuine refugees. Also EU rules allow nationals of any EU country to settle in any other, under a similar arrangement to those enjoyed by US states. This means a Belgian jihadi has a right to live in the UK, even if he is suspected of terrorism.
Police are still searching properties and have not ruled out further arrests.

Gatwick is London's second largest airport after Heathrow, and Birmingham is home to the 42,000 seater Villa Park soccer stadium. It is not clear if either were targets.