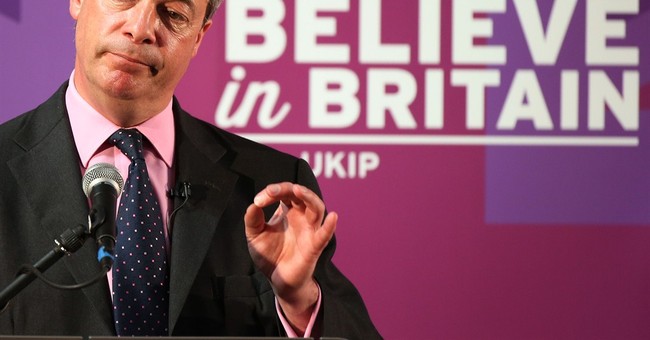 UKIP leader, Nigel Farage, has claimed President Obama is determined to keep the UK in the European Union because he is the most "anti-British President the United States of America has ever had". Mr Farage said the Paris attacks proved the need for Britain to secure its borders, and that EU immigration policy had made the attack inevitable.

In response to a question (1:03 on the video) about why America wanted Britain to remain in the EU despite the risk from immigration Mr Farage pointed out the US had protected Europe in the past. He said: "Don't forget that the Americans did pay an absolutely massive price in WWII, both in the European theater and the Pacific theater. And that after 1945, right up until the end of the 1960s, there were nearly half a million American troops on European soil, there as our protection and our safety against any potential Soviet threat.

But he went on to denounce the current administration in the US, saying: "We have a President in the White House who is the most anti-British President the United States of America has ever had. His first act, on day one, was to remove the bust of Winston Churchill, which had been their for decades, in the Oval Office. When there was the spill, the unfortunate spill in the Gulf, under BP's umbrella he couldn't say often enough, could he, 'British Petroleum' and he said it with a degree of venom.

"Obama is going to do, in the time that he has left, all that he can to keep Britain trapped in the European Union and he even put up a lackey that works for him, a Trade Envoy, Robert Froman the other week who said that if Britain was outside the European Union America wouldn't do a trade deal with us. What complete and utter and totally baloney.

"It's actually Obama and his lackeys like Froman who are threatening one of the most important strategic and friendly alliances that has existed in the world. I hope America gets a better President who understands us more next time round."

Farage's comments came during a speech in Basingstoke, England forming part of his tour to campaign for Britain to leave the UK.