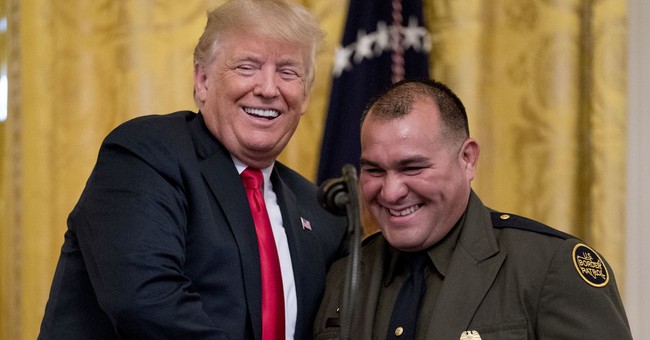 During a ‘Salute to the Heroes’ event Monday at the White House honoring the men and women of the U.S. Immigration and Customs Enforcement (ICE) and the Customs and Border Protection (CBP), President Donald Trump said strong borders are key to the nation’s strength.

“For America to be a strong nation, we must have strong borders,” he commented.

The president also criticized politicians and other groups who have recently voiced opposition to ICE and the CBP, calling their accusations a “nationwide campaign of smears, insults and attacks,” adding that they are “catering to the extreme elements in our society.”

According to a fact sheet posted by the White House on Monday, if the government were to abolish both institutions, that could potentially mean the loss of safety for its citizens.

“ICE and CBP play a vital role in protecting our safety by combatting the flow of criminal aliens, gang members, and deadly drugs across our borders and into our communities. Abolishing ICE would endanger the safety of all Americans and prevent the removal of criminal aliens, including members of the murderous, bloodthirsty MS-13 gang.”

“Those calling to abolish ICE should justify their position to the 518 human trafficking victims and 904 child exploitation victims rescued or identified by ICE HSI in FY 2017 alone,” the fact sheet reads.

During his speech Monday, Trump also likened a blue wave in the midterm elections to a potential crime wave.

“The fact is, people respect law and order. And I think we’re going to have much more of a red wave than a phony blue wave. Blue wave means crime, it means open borders.”

“We will never surrender our nation to the forces of anarchy and chaos and crime. We will not allow our communities to be consumed by deadly poisons and violent predators,” the president said.

“The poisons are flowing across our border and we’re hitting it from every angle, but we need new laws. We need border laws, we need immigration laws, we need them fast, we’re going to get them,” he concluded.

However, critics argue that the agencies, ICE in particular, have become “a genuine threat to democracy” and say “it is destroying thousands of lives.”

“Moreover, abolishing it would only take us back to 2003, when the agency was first formed,” writes Sean McElwee.

“From the start, the agency was paired with the brand-new Department of Homeland Security’s increased surveillance of communities of color and immigrant communities. By putting ICE under the scope of DHS, the government framed immigration as a national security issue rather than an issue of community development, diversity or human rights.”

McElwee also stated that the Democrat Party needs to start pushing back on what he calls an “unbridled white-supremacist surveillance state.”

“Though the party has moved left on core issues from reproductive rights to single-payer health care, it’s time for progressives to put forward a demand that deportation be taken not as the norm but rather as a disturbing indicator of authoritarianism,” he concluded.