Vice President Mike Pence: ‘Abortion Will End in Our Time’ 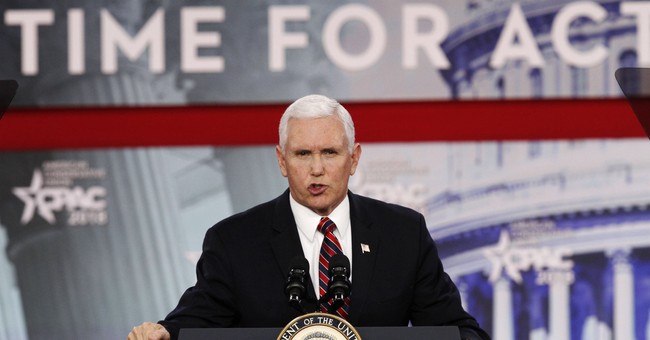 Speaking during a luncheon hosted by the Susan B. Anthony List in Nashville Tuesday, Vice President Mike Pence said he believes abortion will come to an end in America during our lifetime.

“I truly do believe, if all of us do all that we can, we will once again in our time, restore the sanctity of life to the center of American law,” he said.

Throughout his political career, Pence has been a supporter of the pro-life agenda. He also referenced the election of President Trump as a major step forward in the fight to end abortion.

“I urge you on, and I do so with confidence, with confidence that good news is around the corner in America,” he stated, “I have boundless confidence in that President you elected and the pro-life majorities in the Congress of the United States, and in states all across this country.”

According to their annual report, Planned Parenthood performed 321,384 abortions during 2016-2017, while also adding 10 million supporters.

The organization cites litigation as “a crucial tool for protecting and expanding access to care.”

Despite rising public concern in the wake of undercover reports by the Center for Medical Progress which revealed the organization’s involvement in the sale of human body parts, Planned Parenthood said it continues to expand.

“We know there are more fights ahead,” the report stated, “We know that patients in states with hostile political climates will continue to face higher, harder barriers to getting care. Congress and this administration will try again to ‘defund’ Planned Parenthood and undermine our ability to serve patients whenever they can. But as we enter our 101st year, we are stronger and bolder than ever before.”

However, during his speech Tuesday Pence said he saw much progress made by the pro-life agenda during 2017.

“I hope you all feel encouraged today, because I know, I do. Having been in the cause all my adult life, I see more progress in the last year in the cause of life than I have seen in public policy in all of my years.”

“And I truly believe that life is winning in America for a variety of reasons,” he added, “Through the generosity of adoptive families that are opening their homes to children. And life is winning through the compassion of caregivers and volunteers at crisis pregnancy centers and faith-based organizations.”

In reference to the failed Senate vote on the Pain Capable Unborn Child Protection Act, a bill that would have made performing abortions at 20 weeks a crime, Pence said “we have much work left to do. Let us not weary of doing good.”

“And I have boundless confidence in Him who said, ‘Before I formed you in the womb, I knew you,” he added, referencing Psalm 139.

“And with faith in all those leaders, faith in all of you, and faith in God, I know that, together with you, we will once again live in an America that chooses life.”