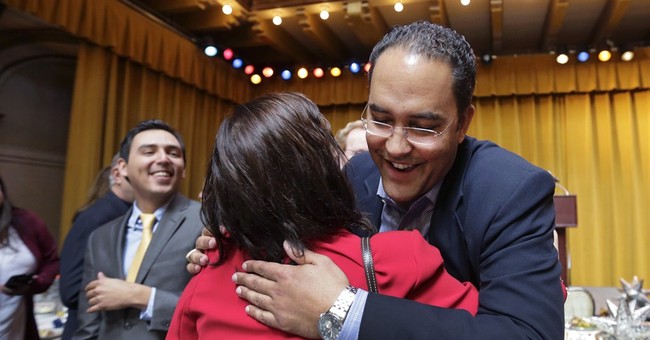 During an interview Sunday on Face the Nation, Reps. Will Hurd (R-TX) and Pete Aguilar (D-CA) said their bipartisan approach to the issue of DACA and border security is what the American public wants to see.

“This is the type of bipartisan approach that the American public wants to see,” Hurd said. “And it’s important that if we’re going to fix this DACA issue and add border security, this is the type of narrow focus that can get 218 votes and can get to the president’s desk.”

The Uniting and Security America Act was introduced Jan. 16, and is a “bipartisan bill that protects DACA recipients from deportation while implementing new common sense border security measures through enhanced technology, manpower and physical barriers, where necessary.”

Under this legislation, DACA recipients (Dreamers) would be granted permission to apply for permanent residency in the U.S. while also increasing funds for border security.

“I have more border than any other member of Congress; 820 miles of it,” Hurd said. “And we don’t have control, and we should. We should be utilizing some of the latest and greatest technology along that border. So this bill – this plan does that, as well as fixing this problem for a population that have gotten here through no fault of their own.”

Currently, the bill has the support of 53 co-sponsors, and is evenly split between both Republicans and Democrats in the House.

When asked if the House Speaker were to allow a vote on the bill if he thought it would pass, Hurd said “Without a doubt. This is the only bill that would have 218 votes on the House floor. We feel very confident about that.”

In response to the same question, Aguilar said “This is exactly what the president has asked for. This is a DACA fix with sensible border security. These are common sense measures. This is the type of proposal that should garner a signature and that he should support. And we feel that we can make our case to our colleagues to get that done.”

However, the president is facing backlash from the media and some supporters for supporting a deal on DACA that would create a pathway to citizenship for Dreamers who came to the U.S. as children.

Trump supporter and Republican Senate candidate in Virginia, Corey Stewart stated “There’s a Trump movement. And it’s not necessarily about Donald Trump. It’s about the things that Donald Trump campaigned and stood for during his campaign. Ultimately, every elected leader needs to stay true to the message that they ran on, otherwise people will leave them.”

In response Saturday, President Trump said via Twitter: ‘I have offered DACA a wonderful deal, including a doubling in the number of recipients & a twelve year pathway to citizenship, for two reasons: (1) Because the Republicans want to fix a long time terrible problem. (2) To show that Democrats do not want to solve DACA, only use it!’

Both Hurd and Aguilar are eager for Congress to act before March 5, the deadline when Dreamers' permits will begin to expire, thus placing their legal status at risk.

“I don’t think anybody in Congress wants to get there,” Hurd said. “That’s why we need to buckle up, sort this out over the next few days, and I think we have a couple of weeks, and get this done before the March deadline.”

“It’s flat-out unacceptable,” agreed Aguilar. “We can’t have policies that deport Dreamers. We shouldn’t stand for it. That’s exactly why we’re working so hard to get this done.”