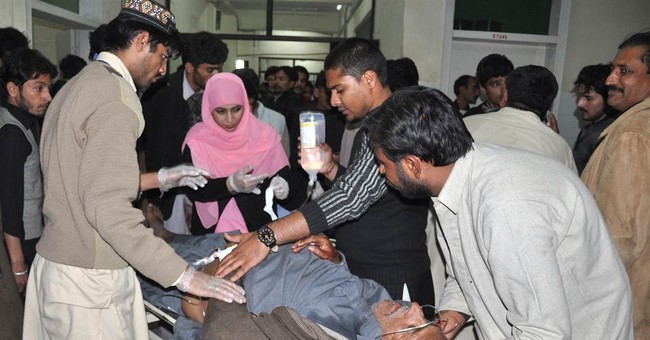 A new global survey of Muslims by the Pew Research Center has found that Palestinian Arab Muslims polled the highest in favor of suicide bombings as a justifiable means “to defend Islam.”

Few U.S. Muslims voice support for suicide bombing or other forms of violence against civilians in the name of Islam. Eighty one percent say such acts are never justified to defend Islam, 7 percent say it’s “sometimes” justified and 1 percent it is “often justified.” to defend Islam. (do we have the ability to compare to the general support for suicide bombings among non-Muslim Americans? Did Pew poll that?)

Even a small minority of Muslims (1%) worldwide translates to 15 million believers - which is hardly an insignificant number.

Muslim-Americans who identify more strongly with their religion are three times more likely to feel that suicide bombings are justified Fifty eight percent of American Muslims rejected al-Qaeda outright, 5 % have a favorable view of al-Qaeda and 27% percent couldn’t make up their minds of the terrorist organization.

“It takes a village to make a suicide bomber it’s not just one person waking up and wants to be a suicide bomber, they must be recruited and groomed by Islamic extremist organizations that prepare them, train them and lead them to a target,”,the Heritage Foundation's Middle East analyst James Phillips told Townhall.

“I think that would be one of the most powerful factors is the presence of Islamic extremist organization that is bent on using suicide bombers as a strategy and then they prepare the ground and in some ways brain wash young people to do their bidding,” he said.

More than half of Muslims in most countries surveyed say they are concerned about religious extremist groups in their country, including two-thirds or more of Muslims in Egypt (67%), Tunisia (67%), Iraq (68%), Guinea Bissau (72%) and Indonesia (78%).

A majority of Muslims in Afghanistan (78%) and Iraq (76%) don’t believe in a woman's right to decide whether or not to veil her face and condone extra-judicial executions of women who allegedly have ‘shamed their families’ by engaging in premarital sex or adultery.

Eighty nine percent of Palestinian Muslims favored think women must always "obey" their husband and favor the imposition of Sharia Law into their society.

Pew found Muslims around the world overwhelmingly want sharia to become ‘ the official law of the land’ and view certain behaviors – including prostitution, homosexuality, suicide, abortion, euthanasia and consumption of alcohol – as immoral. But attitudes toward polygamy, divorce and birth control are more varied.

“Many also think that their religious leaders should have at least some influence over political matters. And many express a desire for sharia – traditional Islamic law – to be recognized as the official law of their country. Some believe it should apply to all citizens but most believe its strictures should only be applied to Muslims,” according to Pew.

A majority of Muslims in the surveyed countries—including Jordan (37%), Malaysia (41%) and Afghanistan (53% )—say religious leaders should play a “large” role in political matters.

“Islamic extremist organization exploit the fact that Islamic religion extolls martyrdom and they use that to convince impressionable young people that they will go to heaven after the operation,” Phillips told Townhall. “By cloaking their Islamist totalitarian ideology in religious symbols they recruit and direct young suicide bombers, although they, the ringleaders, don’t sacrifice themselves. They leave that to people they can brainwash.”

According to Pew, "In all but a handful of the 39 countries surveyed, a majority of Muslims say that Islam is the one true faith leading to eternal life in heaven, and that belief in God is necessary to be a moral person.”

Ironically, even though many countries strongly back Sharia, most Muslims favor religious freedom for people of other faiths.