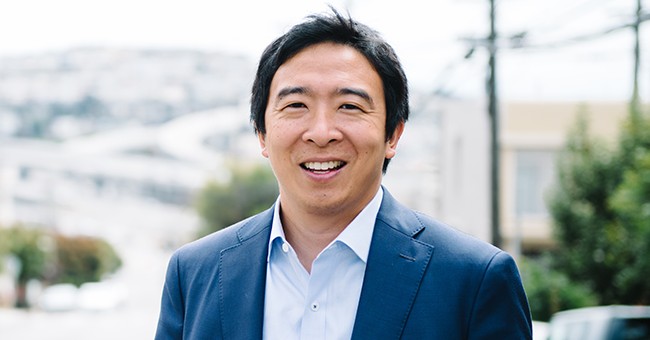 Democrat presidential primary candidate Andrew Yang has published many policy positions on his campaign website. Perhaps one of his best known is the freedom dividend, a twelve thousand dollar per year universal basic income dispensed to all Americans 18-years-old and above, “independent of one’s work status or any other factor.”

But wait, there’s more—here are a few of his other positions:

Yang wants to allow 16-year-olds to vote. He wants to legalize marijuana. And he wants to pitch the penny onto the ash heap of history.

Yang is also advocating for term limits on both Houses of the U.S. Congress and for Supreme Court Justices.

He suggests a cap of twelve years of service for all members of the U.S. Congress.

Washington DC has become a place to spend one’s career instead of a place to solve problems and go home. Term limits would transform the culture of Congress, free members up from the fundraising treadmill and introduce newer legislators with new ideas. https://t.co/qTj77oQlCp

And he proposes an eighteen-year maximum for Supreme Court Justices:

…impose term limits on Justices, and set their terms at regular intervals. Each President should be allowed to appoint two Justices per term served in their first and third years in office.

While a Constitutional amendment could codify this, it could also be done by a President agreeing to only appoint Justices who will pledge to step down after an 18-year term, and Congress only confirming a Justice making this pledge. Congress would also have to agree to impeach any Justice who refuses to step down for no longer demonstrating “good behaviour.” Note that the number of Justices is not set by the Constitution and has been greater and lower than 9 at different points in our history.

Noting the societal importance of quality marriages, Yang also proposes that “marriage counseling for interested couples should be free or heavily subsidized by the government.”

And his LGBTQ position statement declares that “Sexual orientation and gender identity should be protected classes under the law, receiving all the federal protections afforded under the Constitution and law.”

Yang is currently polling at just 1.1 percent in the RealClearPolitics average.