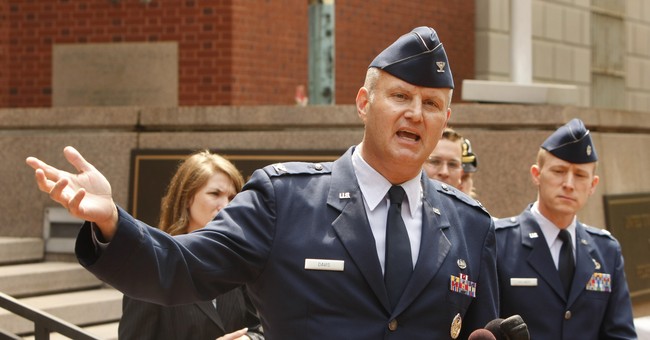 Davis posted five reasons why he believes Cawthorn is a white supremacist, including posing with a Betsy Ross Flag and visiting Hitler's Eagle's Nest, a historical site and tourist attraction in Germany.

- Poses with a Betsy Ross flag

It didn't take long for the left to run with the story. Liberal writer Yashar Ali posted the vacation photos of Cawthorn and made accusations that the Republican congressional candidate treated the vacation to the Eagle's Nest "as if it’s a visit to the Grand Canyon."

Just seeing these @CawthornforNC Instagram posts from 2017...my god.

Referring to Hitler with the honorific “Führer.” Saying a visit to Hitler’s vacation home where he planned out unspeakable atrocities as a “bucket list” moment...as if it’s a visit to the Grand Canyon pic.twitter.com/AvgNSe23cO

Plenty of conservatives on Twitter were quick to call these claims for what they are: absolute nonsense.

"I don't know the guy but he does call Hitler the "supreme evil" in the next sentence," commented conservative media personality Ian Miles Cheong on Ali's post. "Doubt he looks up to him."

"As an addendum the Eagle's Nest is at the end of the Band of Brothers tour," he added. "It's on every WWII buff's bucket list. I don't think it's too weird for someone to want to visit it."

"Let me rephrase this for you. @CawthornNC owns a business, loves America, hates Hitler, and is a viral sensation because of the tragedy he overcame," wrote school safety advocate JT Lewis in response to Davis. "America doesn't deserve him, we NEED him!"

"Tough to pick the dumbest oppo hit of the bunch here, but the brain rot required to read Nazi code into someone's twitter follow count is just extra special," wrote Dailybeast reporter Lachlan Markay in response to the list of allegations.

While Davis might want people to think he was the one who put forth this profound discovery about Cawthorn, most of his accusations come from a Jezebel article published Monday written by Esther Wang.

The piece titled: "My Dark Journey Into the Soul of a Model Young Republican Candidate" was riddled with false statements about Cawthorn's connection to the alt-right movement. She cited evidence including Cawthorn's vacation photos, his use of the Betsy Ross flag in photos, and his support of the pro-life movement, among countless other attacks of the conservative's character.

Other media outlets have run with the story, as well.

Newsweek wrote another story on Tuesday pointing out that the North Carolina conservative had deleted the photos in question with the headline: "Republican N.C. Congressional Candidate Deletes Instagram Photos From Nazi Retreat That Hitler Visited."

Cawthorn has denied all the accusations against him and called out the liberal mob.

"I don’t cower to the mob," he wrote on Twitter. "The new Republican Party that I represent will fight back against liberal lies."

I don’t cower to the mob. The new Republican Party that I represent will fight back against liberal lies.