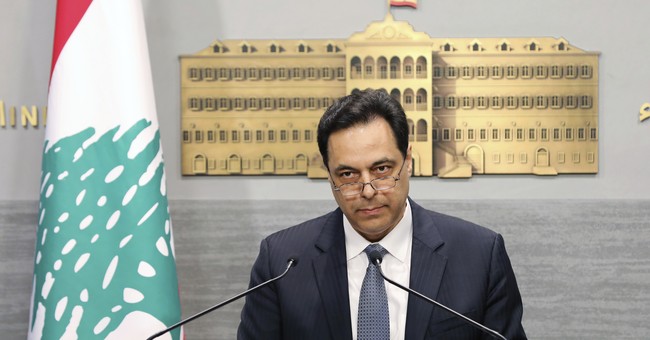 Lebanon's prime minister stepped down from his role on Monday, less than a week after the Beirut explosion that shook the entire city.

Prime Minister Hassan Diab announced the news on Monday during a brief televised national address, AP reported. His cabinet also announced earlier in the day they would be stepping down, as rumors circulated of Diab's resignation.

Last Tuesday the capital was struck by a massive explosion believed to have been the result of improper storage of 2,750 tons of ammonium nitrate, a chemical used for fertilizer, and as an ingredient in bombs. As a result, at least 160 people have been confirmed dead, around 6,000 were injured, and 300,000 were left homeless.

His resignation follows days of protests in response to government corruption that Lebanese citizens feel led to the tragic event.

"I declare today the resignation of this government. May God protect Lebanon," said Diab, repeating the last phrase three times.

He said that he hopes by taking a step back he can dedicate more time to fight government corruption and stand with the Lebanese people as they seek justice for their fellow citizens.

Thousands of demonstrators demanded a regime change, calling for "revenge" against the ruling class of politicians, who they hold responsible for the blast.

Lebanese officials said Prime Minister Hassan Diab knew about the concerns surrounding the storage of the chemical for years, a statement that was only made public hours after the blast.

The Lebanese government's resignation has been a long time coming, mostly stemming from economic turmoil in the region, and this is not the first time the citizens have made their discontent with officials known.

In October 2019, protests erupted over a plan to tax Whatsapp, which was the tipping point in frustration in the country's ailing economy and failure to stop devastating wildfires. Those protests waned in exuberance only because of the devastation of the global coronavirus pandemic.

However, last week's blast stirred up those feelings of resentment towards the government once again, and this time in greater numbers.

Diab blamed the corrupt politicians who proceeded him for the "earthquake" that has ravaged the country.

The ruling oligarchy has held onto power in the country for thirty years, making it difficult to break the cycle of corruption.