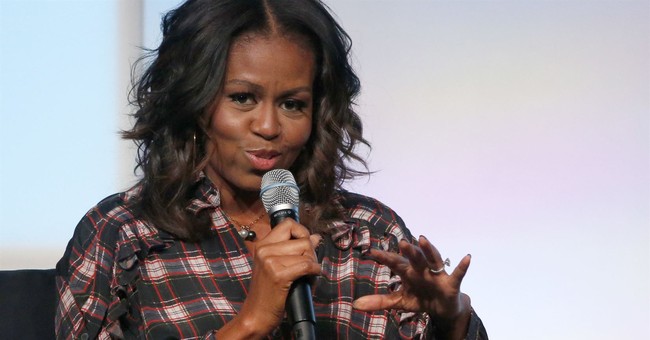 Michelle Obama admitted she was suffering from "low grade depression" during a new episode of her podcast on Wednesday.

The former first lady said she is dealing with depression not only due to quarantine due to the COVID-19 pandemic but also because of "racial strife" and the daily decisions by the Trump administration.

She said seeing the "hypocrisy" of the administration "day in and day out" is "dispiriting."

"I have to say that waking up to the news, waking up to how this administration has or has not responded, waking up to yet another story of a Black man or a Black person somehow being dehumanized, or hurt or killed, or falsely accused of something, it is exhausting," said Obama.  "And it has led to a weight that I haven't felt in my life, in a while."

Obama also said she blames the Trump administration's handling of recent events and acknowledged that she is not the only one experiencing depression during these difficult times.

There is no doubt she's not alone in feeling depressed in the United States right now, as many Americans are in a mental health crisis. Isolation due to the pandemic compounded with underlying mental health issues has set off a spike in the national suicide rate. Concerns for the mental health of children sequestered from friends and classmates have been raised by parents and the American Academy of Pediatrics.

According to data from the Census Bureau, roughly a third of Americans have shown symptoms of clinical anxiety or depression from the pandemic. That percentage is double the number of recorded cases just six years ago. Women, young adults, and those with lower education levels were found to be more affected on average.

More than 40 percent of people in Illinois, Louisiana, Mississippi, Missouri, Washington, D.C., were reported to have shown signs of depression. Anxiety about the state of the nation, civil unrest, and the direction of the country could be a contributing factor in cases of depression for people of all political stripes.

Obama did shed light on how she is coping, which involves keeping a routine, something she did while in the White House.

She also said a large part of healing her depression has come from being surrounded by loved ones.

"So for me, my spirit is lifted when I am feeling healthy, when I am surrounded by good people, you know, so I reach out," she said. "I reach out to my family, and to my friends, even in this time of quarantine."

"You know, I fought to continue to find a way to stay connected to the people in my life who bring me joy, and my girlfriends, my husband, my kids; it’s the small things...," she added. "For me, there is no magic to it, but it is effort because you have to recognize that you’re in a place, a bad place, in order to get out of it."