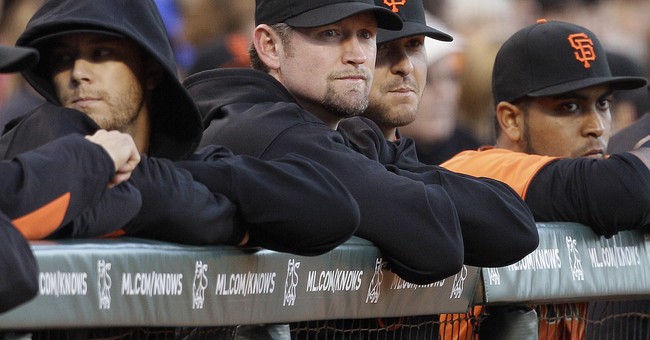 Major League Baseball is back and so, it seems, is the pro-Athlete practice of kneeling during our national anthem in professional sports.

Before an exhibition game Monday night with the Oakland Athletics at Oakland Coliseum, several San Francisco Giants players and manager Gabe Kapler kneeled during the rendition of the Star-Spangled Banner.

This was the first national anthem protest at an MLB game since 2017 when Oakland A's catcher Bruce Maxwell became the first MLB player to do so following Colin Kaepernick's example.

Kapler is not only believed to be the first MLB manager to kneel for the national anthem, but the first head coach in any of the four major North American sports leagues to participate in these types of protest.

MLB posted a video of the protest on Twitter with the hashtag #BlackLivesMatter and the new Black Lives Matter emoji of three fists in different shades of brown skin color.

Members of the @SFGiants kneel during the National Anthem. #BlackLivesMatter pic.twitter.com/QbvAvCZiEs

"It was eye-opening for me what was going one--what has been going on," said Kershaw in one of the quotes. "Silence was probably part of the problem to begin with."

"We must apologetically say that Black Lives Matter," in another photo.

Fans called out the MLB on their clear support of the Giants' actions, instead of respecting the true message of the national anthem. Many were outraged that baseball, just like football, is now being used as a political weapon, instead of a neutral pastime to bring people together from all walks of life.

MLB did not back down on its stance. Instead, they decided to reply to a few of the comments they received.

"Pllllleeeeaaaseeee stop posting things like this," commented one user on the Kershaw photo. "Yes black lives do indeed matter. But it’s a polarizing topic. keep politics out of baseball!"

"Supporting our players and supporting equality is not political," tweeted back MLB.

"You kneel you're disrespecting the military," wrote another user.

"It has never been about the military or the flag," MLB tweeted in reply. "The players and coaches are using their platforms to peacefully protest."

Conservatives on Twitter have also taken issue with the MLB caving to political correctness.

He also posted the "Raising the Flag on Iwo Jima" photo with the caption: "@MLB spits on this."

.@MLB spits on this. pic.twitter.com/85bhXbNmEe

"Poor sad rich black men," wrote radio host Bill Mitchell. "My heart breaks for them. How they must struggle driving their Bentleys and living in their mansions and dating their supermodels and listening to the cheers of their fans for hitting a ball."

Poor sad rich black men. My heart breaks for them.

How they must struggle driving their Bentleys and living in their mansions and dating their supermodels and listening to the cheers of their fans for hitting a ball.

The hashtag #BoycottMLB has been trending on Twitter since Tuesday morning, with plenty of woke people laughing at those offended by the national anthem protests. These people clearly overlook that not everyone in America wants everything to be politicized, especially when the politics are clearly targeted at them.

Former San Francisco Giants player Aubrey Huff also lamented the blatant political display by the baseball team with which he won two world championships. Huff was famously disinvited from the 10 years World Series Championship celebration this year after making comments in support of President Trump. He has persistently lambasted the MLB and the Giants for participating in overtly woke virtue signaling and bowing to social justice "warriors."

Way to go @SFGiants & @mlb you had a chance to take people’s mind off the crazy world they live in. Instead you reminded them of the world they are trying to escape.

President Trump also weighed in on the debate, confirming that the MLB is heading down the wrong path.

"Looking forward to live sports, but any time I witness a player kneeling during the National Anthem, a sign of great disrespect for our Country and our Flag, the game is over for me!,” the president posted on Twitter Tuesday.

Looking forward to live sports, but any time I witness a player kneeling during the National Anthem, a sign of great disrespect for our Country and our Flag, the game is over for me!

Going forward it's unclear whether or not other teams will follow the Giants in their national anthem protests.