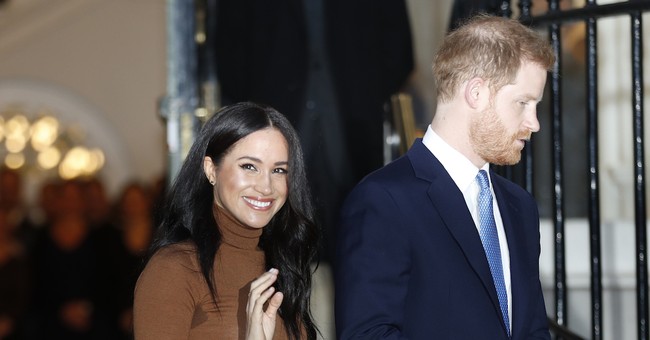 Prince Harry and Meghan Markle want the United Kingdom to acknowledge the past racial injustices of the Commonwealth, according to a new video.

The Duke and Duchess of Sussex participated in a video call last week with The Queen's Commonwealth Trust, where they sat down with a group of Black leaders to discuss the  Black Lives Matter movement, and how they would like to see change come in re-educating those in the UK about past racial injustice.

"There is no way that we can move forward unless we acknowledge the past," said Harry to the group.

"We're going to have to be a little uncomfortable right now, because it's only in pushing through that discomfort that we get to the other side of this," added Meghan.

Meghan gave a virtual address to the graduating class of her former high school in early June, where she mostly talked about George Floyd and the Black Lives Matter movement.

In late June at the virtual 2020 Diana Awards, Harry apologized in a video that "not enough has been done to right the wrongs of the past."

It seems strange for Meghan and Harry to be commenting on the affairs of the United Kingdom. The two infamously decided to step down as royals in January, moving to Canada for claims of privacy and then to Los Angeles; an odd switch considering the presence of ceaseless paparazzi. And even though the two may technically still be a part of the royal family, they no longer represent the Queen or her views.

"When it comes to institutional and systemic racism, it's there and it stays there because someone somewhere is benefiting from it," Harry said in the new video. "We can't deny or ignore the fact that all of us have been brought up and educated to see the world differently."

"It's like growing pains," concluded Meghan. "Growing pains are painful, this process is painful and it has been for a long time, but through that immense pain what we can have tremendous faith in is knowing that there will be growth."