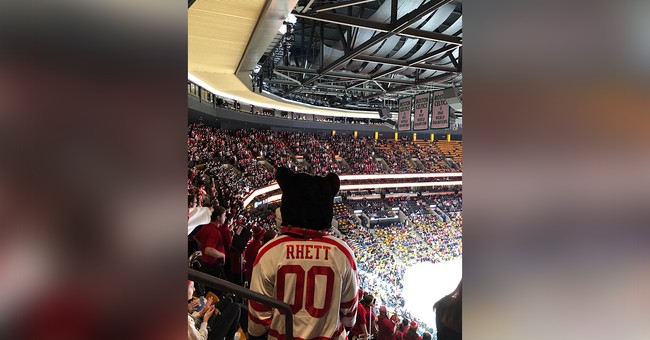 Boston University is contemplating a name change for its mascot Rhett over ties to the movie "Gone With the Wind." The 1939 Civil War-themed film has come under fire in recent weeks for what critics consider to be racist themes.

Rhett, the Boston Terrier that embodies school spirit at BU and is the source of the name "Terriers" for students, has a unique connection to the school. While most assume the color is simply red, it’s labeled as scarlet, therefore the name Rhett pays homage to the "Gone With the Wind's" Rhett Butler, the lover of Scarlett O'Hara. Rhett loved Scarlett, so the mascot’s nickname has stuck with the school for over 70 years.

On Wednesday BU President Robert A. Brown wrote a letter to the university community introducing the debate claiming that the name Rhett celebrated a “fictional character associated with the Confederacy, slavery, and sexual assault.”

“Despite the seemingly cute connection between the movie and our mascot’s name, the fact is that the movie’s portrayal of the American Civil War, postwar reconstruction, and slavery is offensive,” Brown wrote. “And it is reasonable for people to question why, at a university founded by abolitionists, we have a mascot nicknamed for a character in a film whose racist depictions are completely at odds with our own tradition.”

In early June, the streaming platform HBO Max announced it would be removing "Gone With the Wind" after outrage by some over the supposedly racially insensitive content. Last week it returned to the platform with a disclaimer by film scholar and Turner Classic Movies host Jacqueline Stewart, discussing the film’s black stereotypes and racist tropes.

Hattie McDaniel became the first Black actress to win an Oscar in 1940 for her role as Mammy in the film. There should be no argument that the trailblazing actress deserves to have her performance seen by all for generations to come.

"Personally, I think if you put things in a historical context -- because if you start pulling every film... you're going to have to pull all of the blaxploitation movies because they're not depicting us the right way...That's a very long list of films," said Whoopi Goldberg, who was the second Black actress to win an Academy Award in 1991 for her role in the movie "Ghost."

The recent action by BU has caused a strong response from students, especially conservative students who feel this is another example of the university caving to liberal influence.

“It’s just another attempt to rewrite history,” said senior Joe Spinosa, a campus conservative. “We always warned about the ‘slippery slope’ of letting them tear down confederate generals, but now they are literally going after anything and everyone who has anything to do with the traditional American nation, Christianity, and our European roots.”

“It’s a statement of vanity; you think you are so much better than who came before,” said senior Noah Hill, an Afro-Latino campus conservative. “Yeah, students and administrators might’ve taken a liking to brash Black representations in media, but BU today has been complicit in usury and suppression of class mobility with exorbitant tuition rates.”

Brown said that Harvey Young, dean of the College of Fine Arts, and Steve Hall, vice president for alumni relations, will co-chair a committee to review whether or not the nickname “Rhett” should remain. Other members of this committee will include alumni,  students, faculty members, and representatives from athletics.

At this time the Boston University Department of Athletics has no comment on the proposed name change.