Obama Agrees to Secure the Border... Except That it's Turkey's Border 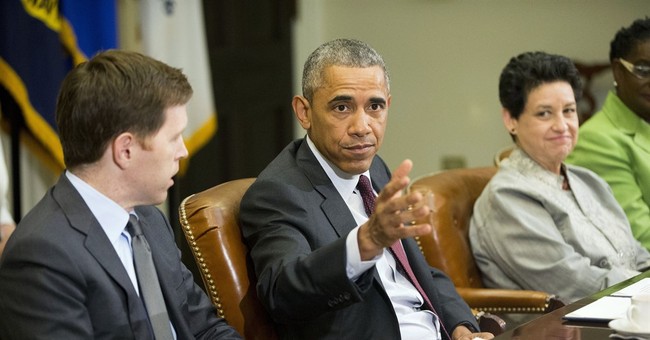 President Obama finally understands that a sovereign country needs to have a secure border in order to protect its citizens.

The problem: He wants to secure Turkey's border instead of ours.

U.S. President Barack Obama and Turkish President Tayyip Erdogan agreed in a telephone call on Wednesday to work together to "stem the flow of foreign fighters and secure Turkey's border with Syria," the White House said in a statement.

It said the two leaders also discussed deepening their cooperation in the fight against Islamic State, which has grabbed swaths of Syrian and Iraqi territory and declared a caliphate.

Thousands of foreign fighters have crossed through Turkey, a NATO member, to join Islamic State over the past few years.

They agreed to "stem the flow of foreign fighters"... that's a tacit admission that securing the border does indeed help protect a country from terrorists.

It also appears that Obama is very concerned about a recent bombing that happened in Turkey:

The Turkish government has rejected accusations from the opposition that it has in the past tacitly supported Islamic State militants operating from Syria and had unwittingly opened the door to a suicide bombing that killed at least 32 people in a Turkish town near the Syrian border this week.

The White House said Obama had condemned Monday's bombing in the Turkish town of Suruç.

"He conveyed condolences on behalf of the American people to the families of the victims, and the two leaders affirmed that the United States and Turkey stand united in the fight against terrorism," the statement said.

By the way, Obama and Turkey's prime minister, Tayipp Erdogan, are best buddies. Erdogan is an Islamist who is a staunch ally of the Muslim Brotherhood and supported former Egyptian president Mohammed Morsi when he was removed by a military coup. The Muslim Brotherhood is essentially the mothership of Sunni Islamic terror groups. Erdogan is also not a friend to Israel, given how he has condemned Israel's actions against Hamas (even though Israel was acting in self-defense) and has referred to the Israeli government as "Nazis."

This makes perfect sense as to why Obama and Erdogan get along so well. Obama is also an ally to the Muslim Brotherhood, which is evident by how often their leaders visit the White House. Obama has been acting unfriendly towards Israel, most evident in how he has previously threatened to shoot down any Israeli attack against Iran and is parading around this Iran deal that very much puts Israel's livelihood in danger. Obama and Erdogan are a match made in heaven!

What's particularly disturbing is that despite their denials, Turkey is providing aid to ISIS. There's this report that Erdogan's daughter is working as nurse to heal wounded ISIS soldiers, and last year Turkey's foreign minister defended ISIS from charges of terrorism. And yet we are helping this government? As Mark Levin suggested, Turkey needs to be thrown out of NATO.

Obama's priorities, then, involve fundamentally transforming America at the expense of national security while helping secure a country whose prime minister is an Islamist. This is not good.

Of Course the Lefty Mainstream Media Glamorize Antifa Rioters in Portland
Beth Baumann
School Teacher: We Don't Want You to Know the Radical Stuff We've Been Teaching Your Kids
Madeline Peltzer
One of America's Largest Cities Is Using a 1984 Tactic to Find Quarantine Violators
Beth Baumann
Sorry, Anti-Trumpers, It Looks Like the DC Circuit *Is* Concerned Over Flynn Judge’s Bias
Matt Vespa