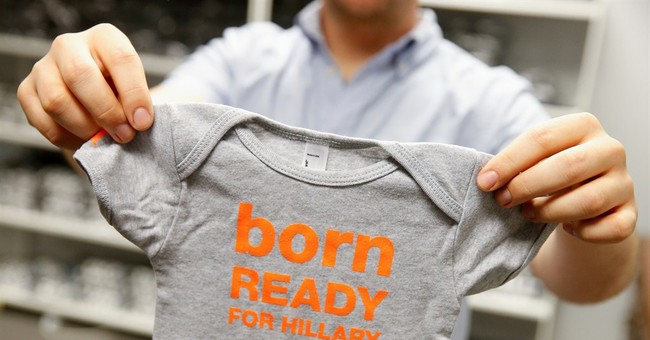 Worried the NSA might be spying on you through your webcam? Are you ready to slip into festive flip flops and stand with Rand? Does your cat needs a collar pledging support for Hillary Clinton? Or are you looking for new apparel for your newborn?

2016 Campaigns and PAC stores are already here with ridiculous swag to meet your every need.

Need to celebrate Sen. Rand Paul (R-KY)’s candidacy announcement? Get yourself “Rand on a Stick.”

“Sure, there are a lot of things you can get on a stick, but can you get the next leader of the free world on a stick? Huh?” the store website quips.

If your eyes need a check, Paul, an ophthalmologist, has a personalized eye chart for your wall.

“We need a president who can see clearly, so why not start with one that knows vision and sight better than any other candidate?” the product description asks.

“Now you can Stand with Rand even when you're sitting in your car,” the site says.

And with a nod to Paul’s 2013 filibuster that brought him to fame, the store sells “Don’t Drone Me, Bro” t-shirts.

Also, MacBook skins featuring a photo of Paul and even “conservative” Beats headphone skins are available. And you never know if the NSA might be spying on you -- which is why Paul’s store offers “NSA spy cam blockers.”

“That little front facing camera on your laptop or tablet can be a window for the world to see you - whether you know it or not!” the site says. “Stop hackers and the NSA with this simple camera blocker.”

For $1,000, customers can get a bound copy of the U.S. constitution, signed by Paul.

“It's size is perfect for comfortable carrying in the pocket of a sport coat, a purse, laptop bag or in the back pocket of some worn out jeans,” the site says of the Constitution book.

Not to be outdone by Paul, the “Ready for Hillary” PAC already has a store up and running, offering essential items like “Lucky Dog” hoodies and leashes and "I'm Ready" ornaments.

If you’re throwing a party, Hillary’s got your back, with “Hillary Rocks!” old fashioned glasses, “Raise a Toast!” Ready for Hillary champagne flutes, and hipster “Quench Your Thirst Ready For Hillary Mason Jars.”

For just $15, you can purchase “‘H’ostest With The Mostest” cocktail napkins, with sayings from the former Secretary of State such as: “I really do hope that we have a woman president in my lifetime,” “Human rights are women’s rights, and women’s rights are human rights,” and “Women are the largest untapped reservoir of talent in the world.”

Sen. Ted Cruz (R-TX), who became first to announce his candidacy for president in 2016 last month, has yet to set up a campaign store.

The New York Times’ Nick Corasaniti writes that Cruz has a "Swag Problem":

Senator Ted Cruz of Texas has addressed standing-room-only, town hall-style meetings throughout his recent campaign sweep through Iowa. But, despite the crowds and enthusiasm, none of the events have completely felt like a campaign event. Something was missing.

A casualty of an early announcement that he’s running for president, the Cruz campaign is severely lacking in swag.

As of yet, Clinton has not officially announced her candidacy.

On Wednesday, Paul’s campaign announced it had raised a first $1 million from online campaign contributions.

INCREDIBLE! Thanks to supporters like you my campaign for President has now raised over $1,000,000 - entirely ONLINE. pic.twitter.com/kAW6xJOYhq