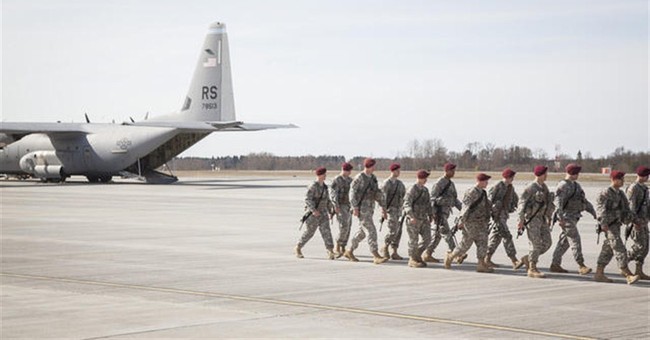 As the conflict in Ukraine continues and Baltic states prepare for war, the Pentagon’s proposed 2016 budget significantly cuts funding for U.S. military programs in the Eastern European region.

The budget proposes that funding for Baltic Air Policing be cut from $15.5 million to $4.5 million in 2016. Also, Air Force Baltic Intelligence, Surveillance and Reconnaissance will be cut from $4.4 million to $0.3 million, while Navy Marine Corps Baltic Operations Multinational Exercises will be chopped down to half a million, from $1.5 million. The budget also eliminates $175 million in funding provided to Ukraine.

Meanwhile, apprehension of a Russian invasion in Eastern Europe continues to rise.

“Of course there is some threat, and in the Baltic states, we feel it very well here,” Latvian MEP Roberts Zile tells Townhall.

Zile points out, as most politicians in the Baltics do, that the situation in Estonia, Latvia and Lithuania differs drastically from that in Ukraine because the three states are NATO allies.

“The constant question is, ‘is Narva next?’ or ‘are the Baltics next?’” Tanel Sepp, Deputy Chief of Mission for the Estonian Embassy in Washington, tells Townhall. “The premise of the question is false. It is not about Estonia or the Baltics. In case one wants to pose this question, it ought to be ‘is NATO next?’ We are as much NATO as any other NATO country.”

The NATO alliance will be heavily relied on should Russia choose to launch another Ukraine-style invasion.

Some politicians wonder if NATO allies will indeed respond if Russia was to make a move on the Baltics. The United States -- considered the most crucial ally in NATO by many in the region -- did not respond in the strongest manner in response to Russian aggression in Ukraine, though it also operated under treaty obligations.

“Will it work, if it happens?” Zile says, of NATO support. “This is the biggest question mark also for European parliamentarians.”

He added: “The views on this situation if it should happen are very different among my colleagues in the European Parliament. There are some supporters of the position that NATO Article 5 works in this situation and all member states will do necessary steps to fight not only for Baltic States in a case like that. If NATO will not work under the famous Article number 5... NATO will be soon broken in pieces. I really can say that the European Parliament is very divided in this way.”

Baltic States are preparing for Russian action. The Lithuanian Ministry of Defense has even published and distributed a nearly 100-page pamphlet to instruct its citizens on what to do in case of invasion. The document gives practical advice on how to behave during an explosion, how to proceed if trapped under debris, and what to do if trapped in a city teeming with hostile military.

“The European Security Initiative and Operation Atlantic Resolve is a particularly visible U.S. presence in Lithuania and a message that we are not on our own. Thank you to the United States, our strategic ally, for that,” Olekas said in a statement.

Thornberry declined to comment on the proposed budget cuts.