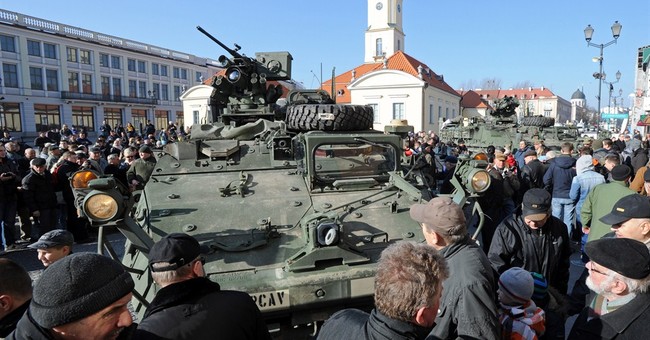 In response to increasingly aggressive Russian military moves, Lithuania announced Friday that it will increase defense spending by one third -- more than the nation has allocated to defense since becoming a NATO member in 2004.

Lithuania isn’t the only Baltic state that’s gearing up in response to Russian aggression in Ukraine last summer. In the region, concern for another move by Putin to expand Russia’s borders isn’t a question of if, but when.

“The Russian aggression in Ukraine has had overwhelming effect on EU security overall,” Tanel Sepp, Deputy Chief of Mission for the Estonian Embassy to the United States told Townhall. “It is about violating different norms and international agreements. It was agreed that you cannot change borders of a sovereign state by force. Russia thinks differently right now.”

Next month, NATO forces from nations across Europe will participate in a grand-scale military training exercise called SIIL 2015 in Estonia.

The NATO exercise is a part of Operation Atlantic Resolve, which was launched to “demonstrate freedom of movement and deter regional aggression” last year “in response to Russia’s armed support for separatist rebels in eastern Ukraine and its annexation of Crimea,” Pentagon spokesman Army Col. Steve Warren said in a statement.

Apprehension over Russia is also prevalent in the European Parliament, according to German MEP Beatrix von Storch.

“There is a big fear of the Russian bear,” Von Storch told Townhall. “It is a blunder of epic proportions that the European Union has failed its historical mission of promoting peace within Europe. We are very close to the collapse of the post-cold-war order. This should alarm anybody who has an interest in lasting peace.”

Also last week, Lithuania announced that they would implement a military draft beginning in May. The draft will conscript 3,000 citizens between the ages of 18 and 38 into military service. Lithuania has observed Russian military drills in the isolated region of Kaliningrad, which neighbors Lithuania to the southwest.

“This will get our army to a whole new level, it will be ready to ensure defense and deterrence, both in its own right and together with the allies,” Defense Minister Juozas Olekas said Friday, according to Reuters.

“Of course there is some threat, and in the Baltic states, we feel it very well here," Latvian MEP Roberts Zile told Townhall. "At the same time, there is a big difference between the Crimea case and if Putin will decide to do something similar in Estonia or Latvia. In that case, we have to remember that Estonia and Latvia and Lithuania are NATO member states… Will it work, if it happens? This is the biggest question mark also for European parliamentarians."
What Crenshaw Realized About the Democratic Party After Big Tech Hearing That 'Should Terrify Americans'
Leah Barkoukis