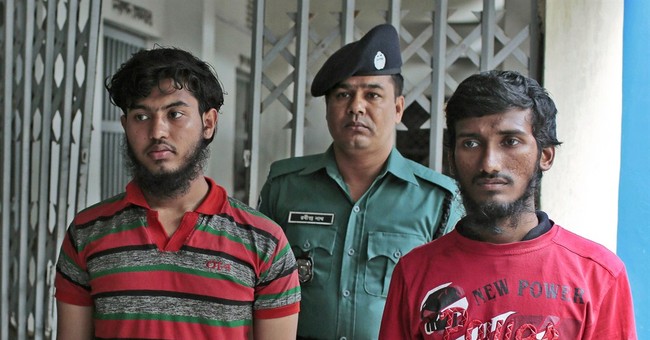 Dead upon arrival, Rahman was brought to a local hospital with two gashes in his throat and four in his face, Bangladesh’s Daily Star reports.

Two assailants in Rahman’s slaying (pictured above) were apprehended almost immediately, and confessed to the killing while being questioned by police, the Daily Star reports.

The pair were students at Hefazat-e-Islam, a known radical Islamist group which has demanded the death penalty for “atheist” bloggers that criticize Islam.

Authorities told local press that during interrogation, the suspects said they had killed Rahman because of his writing on religious issues, according to the Dhaka Tribune.

Also during interrogation the two apprehended suspects said they were instructed to carry out the attack by a third party, whom they named as “Masum.”

“Masum showed us some writings and a photograph of the person. He asked us to come to Dakkhin Begunbari at 9 a.m. when the man comes out of his house for office,” said one of the suspects, according to the Daily Star. “Accordingly, we carried out the attack with cleavers.”

Rahman was the second atheist blogger to be hacked to death in Dhaka in the past five weeks, and the fourth since 2006. In February, secular blogger Avjit Roy and his wife Rafida Ahmed Bonya were also attacked. Rahman had expressed his support of Avjit on social media after the previous attack, changing his profile picture to an image of the hashtag “#iamavijit.”

Freedom-loving nations and coalitions around the world have expressed their condemnation of the murder.

We are horrified and deeply saddened by the murder of Oyasiqur Rahman Babu. We offer our condolences to his family... http://t.co/xa1myMevS6

"The Delegation of the European Union to Bangladesh condemns the brutal assault and killing of blogger Washiqur Rahman...

Posted by European Union in Bangladesh on Monday, March 30, 2015

“It’s a matter of tremendous concern that different journalists and other intellectuals have been attacked,” said Farhan Haq, Deputy Spokesman for the UN Secretary-General, on Monday.

A total of four men -- the three assailants and the third party -- have been charged by local police with the murder.