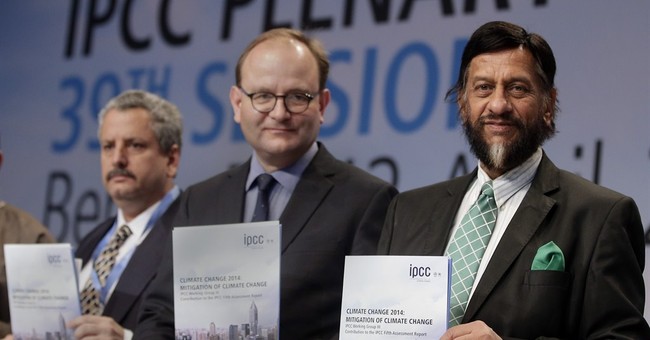 In the June issue of Townhall Magazine, where this column originally appeared, HotAir's Erika Johnsen explains that if greens want people to take “climate mitigation” seriously, they should probably mitigate their own alarm-mongering first.

Since 1990, the United Nations has periodically brought together the world’s leading climate change scientists and global-sustainability technocrats, and whatever other politically correct wonkery they can invent, to sit on their Intergovernmental Panel on Climate Change (IPCC).

This panel’s self-aggrandized task is to put together what the U.N. assures us is an incontestably authoritative report on the many-pronged threats the planet is facing from rapidly accelerating global warming. And, of course, the intrusive government policies that world leaders need to immediately, aggressively adopt to avert threats. Quoth The New York Times in describing the latest findings from the United Nations’ fifth installment of this report for policymakers in April:

“[T]he Intergovernmental Panel on Climate Change found that decades of foot-dragging by political leaders had propelled humanity into a critical situation, with greenhouse emissions rising faster than ever. Though it remains technically possible to keep planetary warming to a tolerable level, only an intensive push over the next 15 years to bring those emissions under control can achieve the goal, the committee found.”

The rather glaring problem with all of the ostensibly new-and-improved, innovative, cutting-edge climate research and its conclusions, which the IPCC insists it has dispassionately performed only on our behalf, is that very little of it is anything we haven’t already heard before.

For decades, so-called environmentalists have been preaching the gospel of a world that is always just a few short years away from utter calamity. Tellingly, the solutions these radical eco-globalists describe always seem to involve expensive, top-down, Big Government, redistributive schemes that necessarily require developed countries to quixotically reverse their own economic growth, and this latest iteration of the U.N.’s assessment has plenty of the same.

The really spectacular news is that, if we all promptly abide by these policies, we can manage to avert a catastrophic rise in global temperatures above a couple degrees Celsius by 2100, and only at the potential cost of shaving three or four percentage points off of gross world product by 2030!

We are, by the way, supposed to take it on faith that we need to do these things and willingly walk the path of self- impoverishment because the “science is settled” (which is, in and of itself, a very non-scientific notion).

Funnily enough, the report did finally decide to acknowledge the 15-year “hiatus” in global warming we are currently experiencing, but only insofar as to more or less dismiss the phenomenon as a fluke.

Researchers have cited volcanic ash, heating oceans, and natural climate variations as possible reasons for the slow- down. But if anything, the pause illustrates just how extensively we don’t know what we don’t know when it comes to climate change. When climate scientists persist in using their demon- strably inaccurate climate models to make their alarm-mon- gering prediction, they only make an already largely skeptical public even more skeptical.

Perhaps the best that can be said for the IPCC’s latest report is that is does not actively hate on nuclear energy and natural gas, but rather acknowledges that these are practical, affordable sources of lower-carbon energy, even if they do come with their own set of tradeoffs.

Overall, however, if the IPCC is really convinced that this time, the report is going to convince wealthy and developing countries to redistribute money to poorer nations and put a cork in their own economic growth merely because “effective mitigation will not be achieved if individual agents advance their own interests independently.”

I would suggest that the globalist bureaucrats of the world are in for yet another rude awakening. This is all ultimately meant to lead to the ever-elusive supranational climate treaty that the United Nations hopes everyone will sign in Paris in 2015. Perhaps if they entertained policies with a lighter touch that can actually achieve marginal gains and start trying to work with the free market and not against it, instead of shooting for absolute top-down policy overhauls or bust, they would encounter a more willing audience and find a way to accomplish at least something instead of nothing. •