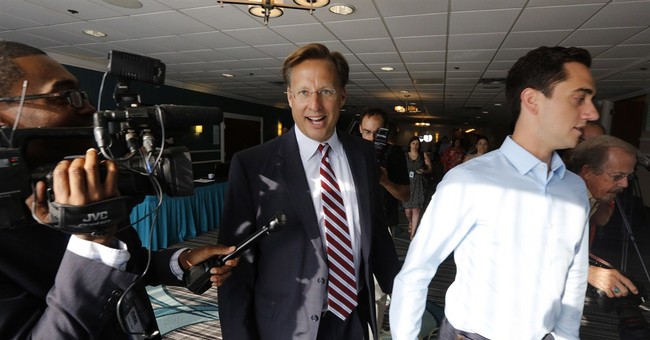 New York City tabloids and 24/7 cable TV outlets are famous for overblown, screaming headlines (think “Headless Body Found in Topless Bar”) attached to even the most innocuous news items. But even they had to take a backseat to the mainstream media outlets ballyhooing the “political earthquake” in Virginia’s 7th Congressional District on June 10.

Majority Leader Eric Cantor (R-VA), who was rumored to become the next speaker, was soundly defeated for reelection by David Brat, a local college professor with little name recognition and even less campaign funding. Records showed that Cantor spent more money at BLT Steak than Brat put into his entire campaign.

But Brat had one major asset in his corner: talk radio. Talk hosts around the nation, most notably Mark Levin and Laura Ingraham, trumpeted Brat as a David versus Goliath tea party champion. Levin suggested that Brat’s 11-point win recalled the old Sam Walton bromide that sometimes the dogs just won’t eat the dog food.

“People want a new Republican Party with fresh faces, with vigorous leadership, and they’re not getting it,” Westwood

Fresh from that contest, talk radio hosts nationwide smelled blood and turned their attention to another upstart tea party insurgent, Mississippi state Sen. Chris McDaniel. He bested six term Sen. Thad Cochran (R-MS) by 1,500 votes in the GOP primary, but failed to exceed 50 percent so both headed in a GOP runoff June 24.

It worked. One heavily African-American county saw a 92percent increase in voting, and Cochran squeaked through 51percent to 49 percent. But to radio conservatives like Iowa’s Steve Deace, the victory may not be worth the price: “Cochran won because turnout statewide was up 43 percent in counties Obama received at least two-thirds of the vote in 2012. The GOP establishment turned out those voters by using race baiting robo-calls, race-baiting fliers, and aligning itself with Democrat operative James “Scooby Doo” Warren to turn out Democrats to save Cochran. In other words, they used Obama/Alinsky race-baiting tactics against their own base.”

Deace calls the GOP’s tactics “an unpardonable sin that will likely have long-term ramifications for the future of this party.”

Salem Radio Network host and Fox News contributor Mike Gallagher, billed on the air as “the happy conservative warrior,” nonetheless struck a more conciliatory note: “I completely understand the frustration that Tea Party conservatives have. My callers express that frustration regularly. But I believe in focusing on the GOP winning in November. Like it or not, folks like Mitch McConnell and Lindsey Graham and Thad Cochran are the ones we’ve got now. It’s time for Republicans to be united.”

But even Gallagher offered a word of caution: “It’s also time for GOP establishment types to stop bashing the Tea Party. ”Former-GOP presidential candidate Rick Santorum, who campaigned for McDaniel, tells Townhall Magazine, “I am disappointed that Chris McDaniel fell just short on June24. However, I am encouraged how his message energized grassroots conservative Mississippians in the face of a very tough opposition.”

challenger McDaniel in Mississippi, offered her own blunt assessment of the GOP runoff in the Magnolia State: “If you want to take on the Establishment, you better anticipate that they will do anything and everything to win, even race-baiting. The good news is that McDaniel won among Republican voters. The bad news is that the people of Mississippi are stuck with a man (Cochran) who can barely answer simple questions and who brags about his ability to bring home the pork.”

Levin echoed Ingraham’s defiant tone: “‘Remember Mississippi’ will be a rallying cry for conservatives for some time.

Democrats to vote in the GOP runoff. The robo-calls, radio ads, and mailers were hateful and grotesque, all intended to disenfranchise Republicans voters and create fear among African-Americans. An absolute disgrace.”

Nationally syndicated talk host Lars Larson traveled through a half-dozen Mississippi communities during the final days of the June runoff and made the following observation: “I sensed that voters wanted something different. But it looks as though the big money interests, fronted by Haley Barbour, were willing to pull out all the stops, spend any amount of money, and even encourage people to break the state’s election laws on cross over voting to win the day…and they did.”

Time will tell if the 2014 electoral map will be painted red or blue, or whether the results in Virginia or Mississippi were

precursors of a new Republican majority on Capitol Hill or more conflict between the GOP and the tea party. •