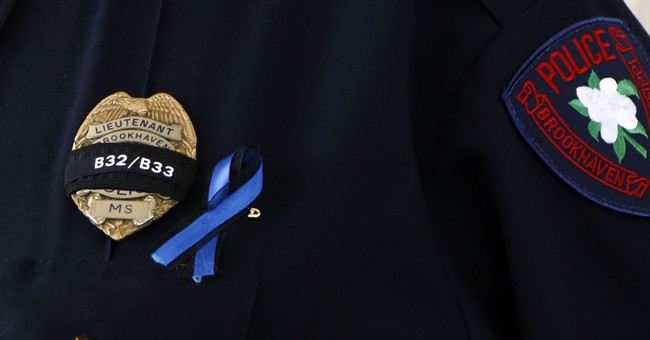 Two days after two police officers were killed in the line of duty in small town Brookhaven, Mississippi, a rival football team playing Brookhaven High School used their half time show to present a skit with students dressed as law enforcement held at gunpoint while cowering on the ground, a move that sparked outrage across the state and prompted the governor to issue a statement of condemnation.

Forest Hills High School, in a half time sketch they say was supposed to be a loose reenactment of the Denzel Washington film “John Q” in which a father takes hostages in a hospital to force treatment for his ailing son, presented a show where students dressed in scrubs and doctor’s coats held fake guns trained on other students dressed as law enforcement laying prone on the ground.

After photos of the show went viral on social media and parents and community members began demanding action, Jackson Public Schools (JPS), local police organizations, and even the Governor, condemned the students’ behavior.

"JPS has a great deal of respect and appreciation for our law enforcement partners,” JPS superintendent Errick L. Greene said in a statement. “The band’s performance does not depict the values and people in our community and was incredibly insensitive to the students, families, law enforcement officials and the entire Brookhaven community. For this we sincerely apologize to all, and we pledge to do better in the future. "

Police Chief Walter Armstrong of nearby Natchez, who is also the president of the Mississippi Association of Chiefs of Police, was interviewed Monday morning by Fox News’ Ed Henry where he said he had been fielding calls from concerned citizens from across the state and referred to the stunt as “distasteful.”

“We are baffled at why someone would think that it is OK to allow children to be armed with AR-15s, and although they are fake weapons, to hold law enforcement at bay,” Armstrong told Henry. “We are very outraged, and that was a very distasteful performance that played out on the football field,” Armstrong said. “While we support our youth, and we support those students, you would think someone that was in charge of those students would have known better. We are very saddened because it happened within 48 hours of the burial of two local officers in that city, and it could not have happened at a worst time.”

This is unacceptable in a civilized society. Someone should be held accountable. https://t.co/hq3hJnj4xA

In late February, in the aftermath of the deadly school shooting in Parkland, Fla., Bryant had spoken favorably of a Mississippi Senate committee bill called the Mississippi School Safety Act that would allow teachers and other public school employees to carry firearms on K-12 campuses.

“This is a common-sense way for schools to increase student safety, should their leadership deem it necessary to do so,” Bryant said in a statement following that passage of that bill by a 7-4 vote on February 27. “As I shared with President Trump on Monday at the White House, we must do all we can to protect our children. This is part of that effort.”

The Mississippi Association of Educators, a statewide association of teachers, condemned the proposal upon passage.

“Having more guns in schools is not the answer to school safety. In fact, it is the opposite of making schools safer,” said association president Joyce Helmick. “The role of teachers is to educate our children, not to act as armed guards. This should be left to professional law enforcement, who are skillfully trained for more than 12 hours, which is all the Senate Amendment currently mandates for teachers.”

Bryant announced over the weekend the band director at Forest Hills has been suspended from his duties effective immediately.