No Calls For Military Intervention In Venezuela (Yet) 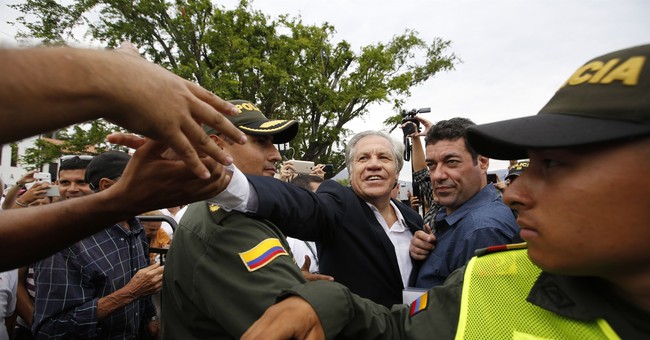 While President Donald Trump and his military officials downplay the possibility of military intervention in Venezuela, others connected to his administration and to the federal government have taken a harder line.

Speculation that the U.S. may be open to a military option with regard to Venezuela has been bubbling since a Wednesday press gaggle Trump held with reporters before a meeting with Benjamin Netanyahu while visiting the United Nations (U.N.).

While Trump left reporters to fill in the blanks about what a “strong option” might be, his military leadership has been less provocative in their language. Vice Adm. Craig Faller said only that they are planning nothing beyond “normal, prudent planning that a combatant command would do to prepare for a range of contingencies," to the Senate Armed Services Committee during his confirmation hearing Tuesday.

While Trump and his military officials have demurred in offering specifics about what they may ultimately do to address the growing crisis in Venezuela — a nation reeling under the tyranny of Nicolas Maduro’s socialist regime and facing starvation and a mass exodus of citizens to neighboring nations — other elected and appointed officials are taking a harder line.

Florida Senator Marco Rubio has proposed “that his country's government should increase aid and some military cooperation with Colombia in order to halt a slide into regional instability triggered by weak governments, drug cartels and what he described as terrorist insurgencies,” according to the English-language version of Agencia EFE.

Rubio, in an exclusive article supplied to EFE, said that the US had already helped increase the stability and prosperity of Colombia through strong support and foreign assistance programs, and that the time had come to extend this further.

"Increased cooperation is essential given the challenges to regional security and stability," Rubio said.

He said some of the regional challenges that the US should address in partnership with President Iván Duque Márquez of Colombia were obvious.

"In Venezuela, Nicolás Maduro and his cronies are driving a once thriving country to the point of total collapse," Rubio said.

He went on to add that in Nicaragua, Daniel Ortega and his wife were turning their government into what he described as a military dictatorship. "And in Bolivia, Evo Morales is crushing dissent aided by the Cuban regime."

Meanwhile, U.S. Ambassador to the U.N. Nikki Haley literally took to the streets outside the U.N.’s New York office building, meeting Venezuelan protestors on their own ground, grabbing a bullhorn, and telling the crowd she and the administration were behind them.

Ambassador Haley walked from her car to a special area designated for protesters set up by the NYPD during United Nations High Level week. Haley encouraged the hundreds of protesters, who seemed to be caught by surprise by her visit, that the U.S. was listening.

“We need your voices to be loud, and I will tell you going to tell you the United States voice is going to be very loud,” Haley declared.

Haley also told the crowd that Trump was “fired up” about the situation their countrymen faced and has been reportedly meeting with Venezuelan opposition activist since her return from the Venezuelan-Colombian border last month.

The U.S. introduced new sanctions against Venezuela on Tuesday, a day before Maduro himself took the floor of the U.N. and spoke for just short of 45 minutes, a speech in which he compared himself to African anti-Apartheid activist Nelson Mandela and blamed the U.S. for the growing chaos in his country.

While no official has yet invoked a strong call for military intervention, Rubio, in an op-ed for the Miami Herald, laid out what he hopes to accomplish with a new bill called The Venezuela Humanitarian Relief, Reconstruction and Rule of Law Act of 2018. In describing what that legislation would entail, and detailing how the U.S. can be of help to the embattled people of Venezuela, the Senator — with an eye toward the future — said that in “a post-Maduro Venezuela, we must work with the country’s people to ensure the rule of law is restored.”