H.W. Bush to Michelle Nunn: Stop Using My Photo in Your Ad 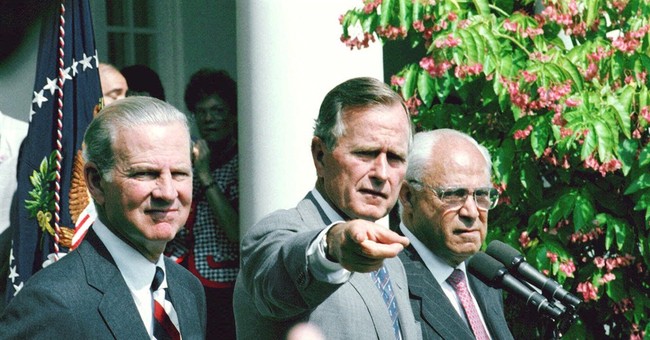 George H.W. Bush is anything but elated over his recent appearance in an ad produced by Democrat and Georgia Senate candidate Michelle Nunn. Nunn’s goal was to seem more bipartisan by showcasing her time as CEO of Bush’s nonprofit Points of Light foundation, instead her disregard for the president’s wishes has more aptly showcased her disrespect.

"Throughout my career I've been able to work with Republican and Democrats," Nunn claimed after a slow zoom of a picture of her with Bush senior appeared across the screen.

Nunn’s background in the nonprofit sector led her to work for the Bush’s Points of Light foundation in 2007. When she announced her intentions to run for the U.S. Senate, the foundation granted her a leave of absence.

According to Bush’s spokesperson Jim McGrath, the former president explicitly stated he did not want to be involved in Nunn’s Democratic campaign:

Michelle and her team have been clearly, repeatedly and consistently told that President Bush did not want them to use his photo as part of this campaign. Apparently, the Nunn team feels they can repeatedly disregard the former president's wishes, which is very disappointing because it's so disrespectful.

Bush has, on the other hand, come out in support of Nunn’s challenger, Republican David Perdue, who is leading by only a slim margin in recent polls.

Barbara and I enjoyed meeting David Perdue, a good man with an impressive background. I am proud to endorse him in the US Senate race in GA.