Here's Your 'Something': NY Post Takes Ilhan Omar To The Woodshed Over Her 9/11 Terror Attack Remarks 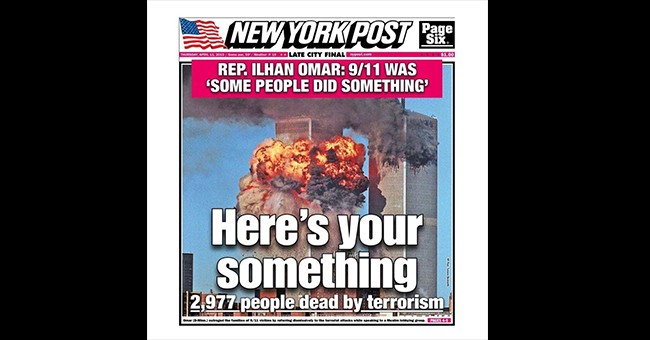 Rep. Ilhan Omar (D-MN) once again landed in hot water after past remarks at a CAIR fundraiser last month showed her downplaying the 9/11 terror attacks. She referred to the 9/11 attacks as an event where “some people did something.” What’s with the censorship, Omar? Do you think we deserved to be attacked? I’m sure the families of the 3,000 or so victims would disagree. But just in case you’re a little slow, Omar—we were attacked by al-Qaeda, a radical Islamic terror group. They hijacked planes and launched a vicious and premeditated assault on our country. According to Nancy Pelosi, you’re a brain-cell away from being declared mentally unfit, so I hope this clears things up. The New York Post, however, delivered a haymaker to the Omar, taking her to the woodshed on the front page and in an op-ed [emphasis mine]:

Ilhan Omar mentions 9/11 and does not consider it a terrorist attack on the USA by terrorists, instead she refers to it as “Some people did something”, then she goes on to justify the establishment of a terrorist organization (CAIR) on US soil. pic.twitter.com/ixP3BJfqxS

In a March 23 speech, Rep. Ilhan Omar (D-Minn.) complained of “the discomfort of being a second-class citizen” before claiming the Council on American-Islamic Relations “was founded after 9/11 because they recognized that some people did something, and [Muslims] were starting to lose access to our civil liberties.”

Some people did something? Wow. What a way to describe the heinous surprise attack on America that claimed 3,000 lives.

Especially when Omar’s focus was Muslim rights: That made it all the more vital to note that the terrorists acted in the name of Islam — as self-described “jihadists” in a war against America, Israel and the West. To call them merely “some people” is to deny a cancer festering in the world Muslim community.

She went further: “Many people expect our community to feel like it needs to hide every time something happens.” Again, by “something happens,” she means (but won’t say) “when Muslims commit acts of terror.”

No one expects Muslims to “hide” after an attack by Islamist terrorists. No group should be blamed for the deeds of a few of its members. But defeating terrorism requires facing the facts of who’s behind it and why.

Instead, Omar claimed Muslims are being “terrorized” by the nation’s response to 9/11.

By the way: CAIR wasn’t founded post-9/11, but in 1994. And the feds later named it an unindicted co-conspirator in a plot to steer US funds to the terror group Hamas.

Still have one question for @IlhanMN @Ilhan - did we deserve it? #NeverForget pic.twitter.com/6NsnEjiIir

Well, she has been allegedly holding secret fundraisers for such groups. But let’s just say that Omar doesn’t know what she’s talking about. After all, again, Pelosi used this line to defend Omar after her series of anti-Semitic rants that were widely reported. The latest episode involved her accusing supporters of Israel for having dual loyalty, which is one of the oldest anti-Jewish tropes out there. She’s too dumb to know what she’s saying, so she’s not an anti-Semite. Yeah, that’s not going to fly. Also, just how Omar can’t claim ignorance for her alleged anti-Semitism—she’s lived here for nearly a quarter century and was educated here—she can’t play dumb about 9/11. In both cases, the ‘she’s too dumb to know what words mean’ only adds more the position that she should be booted from office.

"She's too dumb to be anti-semitic" is not a good defense since anti-semites tend to be very, very stupid. https://t.co/KB5Adkd0GW